Gimme Sabbath – With or Without Ozzy 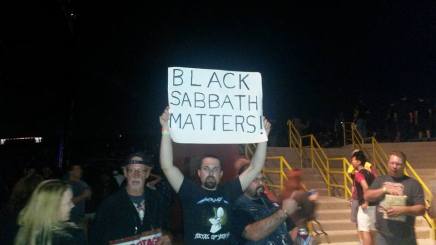 As one of the three people that defend’s Black Sabbath’s Forbidden album, their unfairly maligned 1995 release that was produced by Ernie C of Body Count and features guest vocals from Ice T on the opening track “Illusion of Power”, you could fairly assume that I’m more than a casual classic rock fan who was out to see Black Sabbath play all of the tried and tested FM staples, along with a few well known deep cuts, on their final tour.  But the final tour it is, and Sabbath know what the people want; and what the people want, the people get… sorta.

I was at their Chicago gig on September 4th at an outdoor amphitheater, standing on the lawn, watching a bunch of ants onstage, and while it wasn’t bad, I think the audience made up for Ozzy’s lack of energy.  For the Sabbath neophyte, since its inception in 1968, Black Sabbath pretty much defaulted to the leadership of guitarist Toni Iommi, who is the driving force behind every lineup of the band.  While the majority of rock fans consider the group’s original lineup – Ozzy Osbourne, guitarist Toni Iommi, bassist Geezer Butler and drummer Bill Ward – to be the only lineup that matters, Iommi considers long time side man and keyboardist Geoff Nichols, former drummer Cozy Powell and former singer Toni Martin, to be as integral to the band’s career as the other four gentlemen; at least that’s the way it seemed in his autobiography, Iron Man.

And I’m not going to make the absurd claim that Toni Martin sung albums The Eternal Idol, Headless Cross, TYR, Cross Purposes or the aforementioned Forbidden are anywhere near as classic, good and important as the first six Sabbath records; neither will I say the Dio albums Heaven and Hell, Mob Rules or Dehumanizer are as good as those either, nor the same about the Ian Gillan album Born Again or the Glenn Hughes album Seventh Star.  I’m with the majority on this one, but I will say that, as a longtime fan, I realized that 3/4 of the original lineup was going to primarily stick with material that most people would be familiar with.

With that said, I think it’s absolutely pathetic that Ozzy just stood there saying the same two lines over and over again; “can I see your hands?!” and “I can’t hear you!” Okay, to be fair, he occasionally said, “can I see your FUCKING hands?!” and “I STILL can’t hear you!”, but, if THAT was going to be the performance I got from Ozzy, they might as well have had Ian Gillan, Glenn Hughes or Toni Martin; hell, I’d much rather Iommi and Butler be joined by Rob Halford of Judas Priest, like they were in 1992.

So, for the longtime fan, it was the Iommi/Butler Black Sabbath review, featuring latest drummer Tommy Clufetos, a journeyman musician who has previously played with Alice Cooper, Ted Nugent, Rob Zombie, John 5 and Ozzy himself (there are others on the wiki page if you’re THAT curious).  I would have loved for Bill Ward to be there, but I would love lots of things, and, at least, Clufetos has lots of tattoos and a beard and was never in Rage Against the Machine.

As for the set itself, the exact count goes like this; three from Black Sabbath, six from Paranoid (that is if you include the opening bars of “Rat Salad”, which segues into a drum solo), three from Master of Reality, one from Vol. 4 and one from Technical Ecstasy.  That means they played NOTHING from Sabbath, Bloody Sabbath and Sabotage.  That also means they played nothing from their completely forgettable reunion album 13 or the passable The End, so that’s a plus. If we want to get REALLY technical, Geezer played “Basically”, the minute long bass intro to “NIB”, so feel free to count that as four songs from Black Sabbath.

While “Snowblind”, the group’s coke anthem from Vol. 4 is probably my favorite Sabbath tune – in spite Ozzy ruining any subtlety in the song by shouting “COCAINE!” at the end of every line – I would have loved to hear “Sabbath, Bloody Sabbath”, “A National Acrobat”, “Killing Yourself to Live”, “Hole in the Sky”, “Symptom of the Universe”, “Am I Going Insane? (Radio)” or basically all of Vol. 4; I especially wanted to hear “Supernaut.”  I was also kind of surprised they didn’t play “Sweet Leaf”, but that they did play “Dirty Women”, from the Technical Ecstasy album, which would have been the worst album by the original lineup had 13 not come out.  On the other hand, their 1978 album Never Say Die! is remarkably underrated, so there ya go.

Unsurprisingly Sabbath played the customary hits “War Pigs”, “Iron Man” and “Paranoid”, and I wonder how they don’t get sick of playing that last one, since, like, come on… that’s the first song I ever learned to play on guitar.  At least when they played “Black Sabbath”, the tri-tone, three chord, plodder that opens their first album and scared the bejeezus out of the kids of a much more innocent America of 1970, Iommi added a few extra bars of soloing during the headbanging part, and I thought it was neat how they began with the first few bars of the instrumental “Rat Salad” before segueing into Clufetos’ drum solo, even it went on a bit too long.

I would mention something about opening band Rival Sons, but we arrived too late in their set to hear much.  From what I did hear, they’re a 70s rock revival band; not bad, but nothing essential.

As for Sabbath, while I will always enjoy Toni Iommi’s and Geezer Butler’s guitar/bass interplay and think that Clufetos did a fine job on drums, I think the performance was little more than a revival show for the old timers.  As a fan of Deep Purple, Uriah Heep, Hawkwind and UFO, old bands who still put out new and interesting records – Now What?!, Outsider, The Machine Stops and A Conspiracy of Stars, if you were wondering – I think it’s sad that the band that takes the lion’s share of credit for this here heavy rock/heavy metal/hard rock/even heavy prog genre that we all love so much practically cashed in their chips onstage.  I know someone will yell at me for not mentioning the latest Nazareth record Rock ‘n’ Roll Telephone, but that one does suck.

On the other hand, nothing is stopping Iommi and Butler from rocking out with other musicians and creating new and interesting records, which I believe they are already doing…