Why Are Annoying Feminist Bands Not Allowed to Have Tomatoes Thrown at Them? 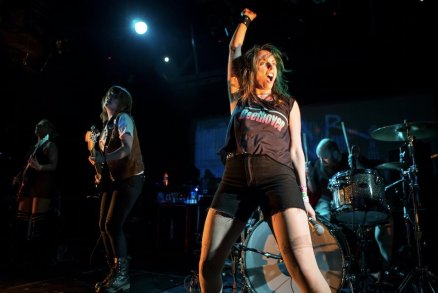 When I see the singer for the Baltimore based, feminist punk band War on Women (good fucking god), I don’t think about “smashing the patriarchy”, I think about smashing between the sheets.  Aside from those stupid, “tough grrrl” faces she makes, she’s got a good figure and made the smart choice of not doing her hair up in a punky style, letting it go all flowing and wavy. One would think a feminist punk band called War on Women would be some sort of parody, but this proselytizing, subtle as a sledge hammer nonsense is the real deal.  Watch this.

God, look at the leggings on that slut on the left.  And look at that all male rhythm section passionately bashing out a generic 4/4 pattern over which these sexy, young lasses can yell out their female rage.

Now, look, I’m all for the XX’s picking up the geetarz and bashing and smashing away just like the dudes do – I’m a fan of Girlschool, White Zombie, X-Ray Spex, the Slits, the Fall, Sonic Youth (even though their lyrics are retarded), the Adverts and the Rezillos, bands I listen to because of their music and not because of the genitalia of one or all of their members – but, once again, as the underground scene becomes more and more indoctrinated in Cultural Marxist, politically correct nonsense, the more we’re going to see bands like this who are “smashing” an imaginary patriarchy, when, in actuality, they’ve got Beta male orbiters just pining for their attention and white knights ready to protect them from “unwanted advances” at the drop of a hat.  In a scene that’s still dominated by men, being a woman, especially one that look like the ones pictured above, gives you unprecedented levels of control over the dicks of the men involved.

All that would be fine if they were just bloody honest about it!  Instead we get bogus articles such as this one from Bitchfork about the alleged “misogyny” in noise rock, singling out the band Rectal Hygienics, who I actually saw last night at Berserker Fest in Detroit.  I tend not to take an article seriously when it includes a line like this one:

As a person living in a genderfucked body that was assigned female identity at birth and has been mostly read as female by society since, Rectal Hygenics’ lyrics are exhausting and painful in a very visceral way.

Poor baby being born a WOMAN in a Western country where you don’t have to worry about having your clitoris cut, being forced to wear a burqa or becoming the victim of an honor killing.  She makes passing references to “Prayer to God” by Shellac and “No Pussy Blues” by Grinderman and acts as if respective singers Steve Albini and Nick Cave are doing something other than singing about praying to God that someone will kill his lying, cheating whore wife and her lover and the blues because he ain’t gettin’ no pussy. She then goes on to quote the “offending” lyrics of Rectal Hygienics:

“Spoiled fuck machine/ Think you’re on easy street/ You’re a slave to man and what he puts inside of you/ Stinking pack mule/ You smell like shit,”

Now these lyrics aren’t in the best of taste and I don’t know if they’re supposed to be for shock value or have a message or, in fact, even be understood at all because, when I saw them last night, I didn’t even hear lyrics; in fact, the singer wasn’t even facing the audience.  All I heard for 30 minutes was “vrrrrroooossshhh” and “pound, pound, pound.”  She does get one thing right though; they do seem like a blatant rip-off of tasteless Swedish noise rock gods, Brainbombs, who stole all of their lyrics from sick and tasteless “transgressive” shock writer Peter Sotos.  But that’s all besides the point.  Why shouldn’t “misogynistic” lyrics be allowed?  If she really stands by the mantra of “freedom of speech is not freedom from criticism”, then why is she trying to be the arbiter of what messages are “acceptable” in any genre of music?  Besides, what could she possibly have to complain about when she’s got a mangina band like Pissed Jeans emasculating themselves in the song “Male Gaze“?

it’s when a smile becomes a stare and it starts to burn
it’s when you ask him to knock it off and he doesn’t learn
the sad routine doesn’t change if he’s broke or a millionaire
there’s no getting through, that’s how it is
he’s never had to care
it’s when you’re judged before you even get to speak a word
it’s when you make the smartest point and it goes unheard
i’m not innocent – i’m guilty
i’m not innocent – but i’m sorry
it’s just the male gaze – it’s in me i know it
i feel it all around me – i wish i could destroy it
yeah it’s the male gaze – i’ve had it forever

Whoopdy-fuckin’-do!  Men look at women when they’re attractive!  Thanks for putting down your hammer on 100,000 years of evolutionary biology, ding bat!  On the other hand, Pissed Jeans is a solid AmRep revival band and I enjoyed seeing ’em live.  There was this super cute red head with glasses at the show in Detroit, but I was too much of a chicken to talk to her even though we shared a moment, making eye-contact, air guitaring and drumming in sync.  Chances are she probably would have accused me of trying to rape her if I talked to her, though.

But, at the end of the day, there is no “war on women.”  If you’re young and attractive and live in a Western country, the world is your oyster; if you don’t make stupid decisions, there is literally nothing easier than being a woman in Western society.  As Iggy Pop pointed out in “You’re Pretty Face Is Going to Hell”, you won’t be young and attractive forever, so, instead of complaining about how it’s a burden on your existence, why don’t you celebrate your privilege and sing about cool stuff like death and Satan?

She asks, “Are we supposed to sit back an [sic] appreciate this as ‘art’ for ‘art’s sake’?”  You’re not supposed to do anything.  In the words of Alice Cooper, “you are the only censor. If you don’t like what I’m saying, you can turn me off.”

And, for the guys, grow a pair and throw on Blood, Guts & Pussy by the Dwarves!