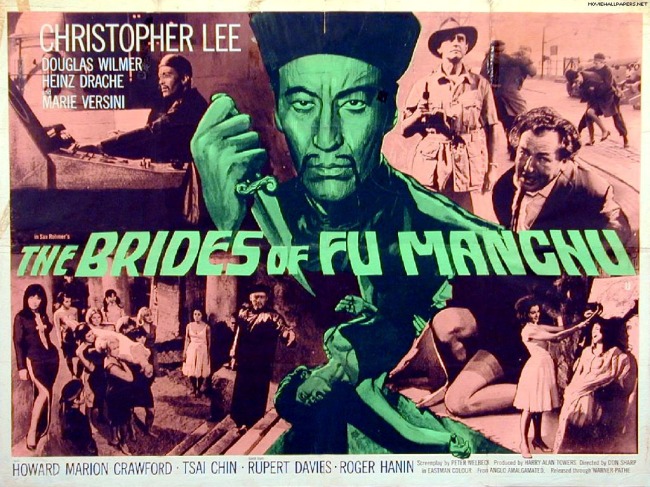 If you’re one of my loyal readers into the music profiles, I apologize for the movie overload.  It’s way easier to write movie reviews than really lengthy band profiles where you review every album.  I’m working on part one on a piece about the Stranglers so stay tuned.

Do you know what that means?  That means that in five different films, he had people put putty over his eyes so he looked Asian and acted like a maniacal super villain.  Clearly he would have to find Fu Manchu a much more laughable role than Count Dracula!  We can only hope.

And I’m not politically correct enough to find it offensive that a white man would play an Asian.  As far as I gather, the only Fu Manchu film to really cause any controversy was The Mask of Fu Manchu where Karloff’s take on the character and situations involved caused people from back then to consider the film offensive.  But, as far as I gather, Lee’s Fu Manchu does not exhibit any Asian stereotypes nor does he want to destroy the white race and rape its women; he just wants to destroy the human race so it’s okay.

I’m confused though.  I’d already watched The Castle of Fu Manchu and that one begins where The Brides of Fu Manchu ends; that is, with the underground hideout exploding and Fu Manchu escaping.  But there is another film that came out between the two called The Blood of Fu Manchu, which I have yet to see.  So, I’ll have to get back to you on that one.

The Brides of Fu Manchu is not surprisingly really stupid and, for the most part, pretty boring.  It’s basically a cross between a less interesting James Bond movie with a Sherlock Holmes mystery; the main detective looks like Peter Sellers playing Sherlock Holmes and his assistant looks like a Watson type.

So why two iron crosses?  I like the hideout sets in the pyramid and the hilarious, “futuristic” command center from which Fu Manchu operates.  There are also lots of Italian/Spanish tan-skin, big-eye cuties to look at.  Otherwise, this film is completely lacking in gore, suspense or anything interesting at all.  The “brides” don’t even really do anything.  The only cool thing that happens is when one is dropped into a pit of snakes.

I apologize if this review is lacking in content but there really isn’t much to say about the film.