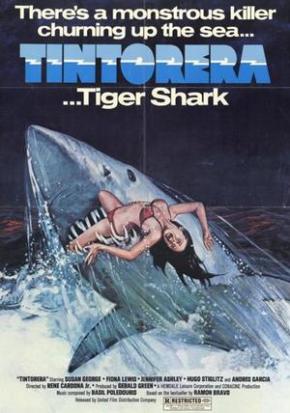 This is the second night in row that I’ve been mislead by a movie’s title and poster. And, incidentally, in both cases, the alleged blood and gore were replaced by copious amounts of nudity. Strangely, Tintorera: Killer Shark is the first film I’ve seen from Mexican director Rene Cardona Jr., who I otherwise wouldn’t know about except that I’m dying to see Guyana: Crime of the Century (and now Terror Storm and The Bermuda Triangle have piqued my interest as well).

Okay, it sort of is since there is a killer shark in the movie. But most of this ridiculous film’s running time concerns two shark hunters played by Hugo Stiglitz and Andreas Garcia (who resembles Elliot Gould) and their attempt to shack up with as many women as possible.

Holy hell, this movie is so bad and stupid it’s surreal. There’s no beat or structure to it; there’s just scene after pointless scene in which people meet up in a cantina, beach or late night dance, bed together, have romantic montages in various locations – including a particularly pretty one atop some ancient pyramids – before something goes wrong and it starts over again.  Somewhere, in all of this, there is a plot about a killer shark – the kind that attacks you if you provoke it.  How this got marketed as a piggy-back off Jaws, I have no clue.

The shark kills exactly two people in the entire movie.  The first is a woman over whom the two main characters are pining after.  Neither character inquires about her disappearance.  She’s gone and that’s that and let’s move on to other women.  More than halfway through, they start a sex triangle with Susan George who must have been starved for work after her performance in the abominable Mandingo.  And this is where the movie gets a bit more interesting.  All of a sudden, there are copious amounts of homo-erotic insinuations including their “sharing” of George in one sex act – which is unfortunately not shown – to blatant closeups and point of view shots from our two characters which imply they might have a secret attraction to each other.

That’s how damn weird this movie; where is the shark, goddamit?  Eventually we get to a climax where one of the guys hunts the shark down to avenge the other (oh spoiler!) as if the shark killed the guy out of maliciousness because, ya know, sharks think like that.  Then, after that, it flashes back to Susan George and the two guys for some reason, as if to remind the audience of the love they once shared.  Wow.

Oh, and this movie isn’t exactly female friendly either.  All of the women are just sex-crazy and jump into bed the second they are asked.  The most creepy scene is when two thrill seeking women who have nothing to do with the plot get sexually assaulted atop an orange truck but, instead of being repulsed by the two ugly, overweight rapists, they unzip the old jeans and get busy; cuz ya know, being raped can be good time as long as it’s in a foreign country atop an orange truck.

Say!  That’s a unique coincidence, isn’t it?  Susan George has now been in two films where a woman who is being raped begins to enjoy the experience – the other is Straw Dogs where George is the woman in case you’re wondering.

What else is there to say about this film?  Nuttin’, it sucks but it’s weird so I guess watch it but be warned that it’s over two hours long and has almost nothing to do with the shark.

Also, I think the DVD we were watching was defective.  We wanted English dubbing because acting is negligible for this type of movie. So they’re talking in English.  Then they’re talking in Spanish so I thought those are just minor parts that we don’t need to understand.  Then, after they started talking in Spanish for long periods of time, I put on the sub-titles so I’d understand it and turns out they were saying things that were relevant to the plot.  Then they would switch back to English – sometimes in the same conversation – and the subtitles for the English parts would be in Spanish!  If you happen to stumble upon this review and have seen this movie on DVD, can you tell me if you’ve experienced the same thing?