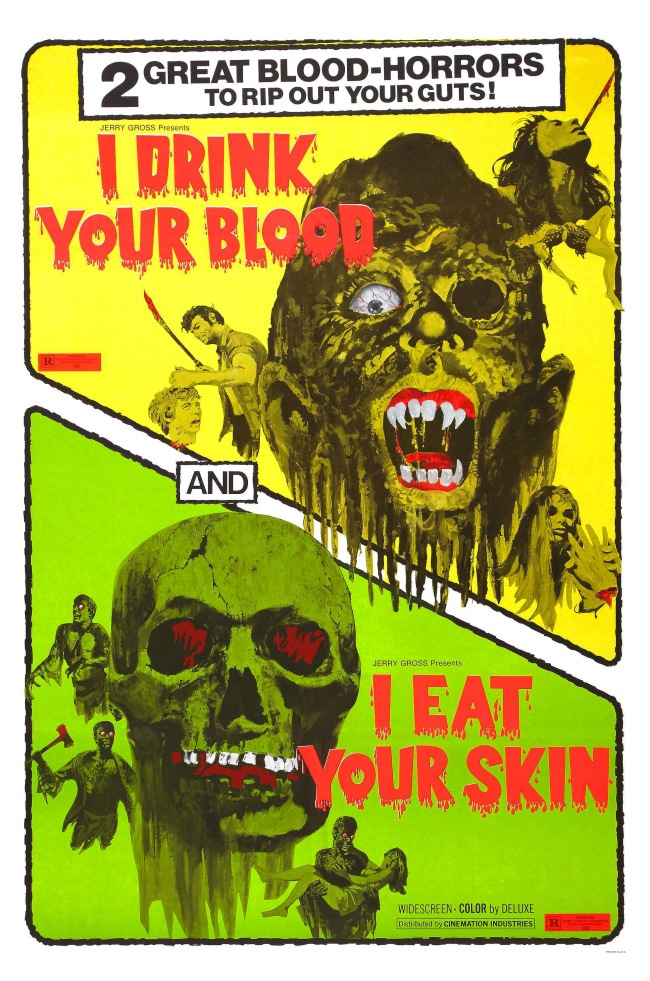 I am pretty sick of zombie movies but that’s because the only ones anyone ever makes are the stereotypical ones with hordes of flesh eating, walking dead who infect others by biting them and can be killed by a blow to the head.  But I wonder why it’s been such a long time since anybody has ever explored the classic voodoo zombies of the pre-Night of the Living Dead era?

Before Night of the Living Dead came out zombies were controlled by a voodoo master or some other similar force and just did the master’s bidding.  They pretty much acted like brain dead henchmen who would just as easily chop someone up with a machete as carry a bale of hay.  This topic fascinates me yet everyone just wants to watch crap like The Walking Dead.  And don’t tell me to see it.  I don’t have very much interest.  I saw the pilot and thought it was pretty standard stuff.  Maybe I’ll read the comic since I hear that’s all right.

Now then, one thing that boggled my mind about I Eat Your Skin is that there was no skin being eaten.  I suppose you could argue that the formula the doctor used ate people’s skin away but that’s a pretty ambitious reference to the title, I think.  More than likely it just sounded cool, especially on a double feature with I Drink Your Blood, which I have yet to see.

I Eat Your Skin is not a perfect movie but had enough of what I wanted to see that it worked for me.  The plot involves a womanizing writer named Tom Harris who is played by William Joyce who reminds me of a poor man’s Robert Ryan.  He, his publisher and his publisher’s wife take a sojourn to the Central American island called… Voodoo Island in hopes of inspiring Harris by surrounding him with voodoo culture.  The only thing Harris does is chase after Coral Fairchild (Betty Hyatt Linton) the daughter of the scientist Duncan Faichild (Dan Stapleton).  His conquests are then, often interrupted by the strange looking, bug-eyed, corpse like zombies, who attack people at random.

The acting is all hammy and hack.  The dialog is dubbed, making characters sound as if they are providing voice overs when they are actually just speaking.  There are attempts at comic relief which are horrible; often involving the publisher’s busty (their words, not mine!) wife who is incredibly annoying!  And the dialog is awful; unfunny one liners, corny fake insults, cheesy come-ons, etc.  Yet, I enjoyed it!  Writer/producer/director Del Tenney (known for such classics as The Curse of the Living Corpse and The Horror of Party Beach) does his best to entertain on a miniscule budget.  The movie is surprisingly violent for something that came out in 1964.  It’s not H.G. Lewis violent, mind you.  But there is a decapitation by machete, stabbings of various kinds, a torch to the face and slowly rotting skin.  But probably the best and most original event was when a zombie holding a box of explosives walks directly into the propeller of a helicopter causing it to explode.

Also the set pieces were neat looking.  I love this voodoo stuff so to me, temples with various masks and tropical jungle environments are all a plus.  I was disappointed that movie was in black and white.  Typically I don’t care about that however the movie should have been in color since it takes place in a tropical environment.  I really wanted to see the lush green of the trees and the multicolor masks and costumes that the natives used during the extensive voodoo ceremonies.  Oh well.  I also have issue with how the cheap, Alpha Video DVD release I watched it on, was formatted to the 1:33 ratio as opposed to being in widescreen.  It actually cut off parts of the credits.  Now how hard is it to release something in its correct aspect ratio even if you are a budget DVD company?