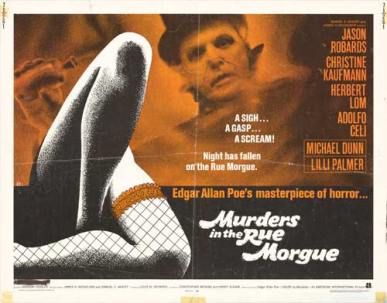 What a frustrating movie!  I don’t know if it was just poor editing or a poor script but, for whatever reason, Murders in the Rue Morgue unintentionally ends up being like a Luis Bunuel or David Lynch film!  I love both of those directors but, if I wanted a film that makes it unclear if the entire thing is a dream not, I’d watch The Discreet Charm of the Bourgeoisie.

In 1971 it had been seven years since American International pictures had released a film that was named after but bore little resemblance to an Edgar Allen Poe story.  Not only does Murders in the Rue Morgue not have an actual gorilla in it – it has a man in a gorilla costume and that part is pretty cool, which I’ll explain momentarily – but it doesn’t even have a morgue in it!  The “Rue Morgue” in question is actually a theater!  Who the hell would name their theater The Rue Morgue?

What’s weird is that nobody in their netflix or IMDB reviews mentions or makes a strong point about how damn confusing this movie is, almost as if they chose to ignore this aspect of the film.  Ostensibly the film takes place in 19th century France and is just about how this crazy guy named Rene Marot (Herbert Lom), who wears a mask that covers up his acid-disfigured face, goes around killing and pouring acid on people who are associated with Cesar Charon (Jason Robards), the head of the Rue Morgue theater.  All the while Charon’s wife Madeleine (Christine Kaufmann) keeps getting into a sleepy, dreamy state that most likely recalls past events which she probably blocked out but serve as a missing piece to the mystery as to why Marot keeps killing and pouring acid on people.

The problem I had and the reason I started the review so negatively is because every time Madeleine goes in a dream state, the film never returns to her non-dream state in a clear way.  Or rather, we never actually get to see the return to the real world!  It all starts happening early in the movie; Madeleine is on stage, performing a part in a stage play and, as she’s being tied up, she goes into a dreaming fit where she sees a rope dropping and the Herbert Lom character falling and then will wake up in bed.  At first I excused it but then it happens again with no clear point of return to the real world!  And, I guess, what are supposedly important plot points happen before, during and after the dream sequences start!  So what gives?  Is this ALL happening in her head?  I watched until the end for some sort of closure but NOPE!  The end revealed nothing!  In fact it seemed like it was just arbitrarily tacked on just for the movie to seem even weirder.

So why such a high grade for a movie I’m essentially trashing?  The devil is in the details and the details me likes a lot!  First of all, the opening scene is a hoot!  I may be spoiling it by revealing it but it’s close to the beginning so whatevs, it’s cool.  Basically it starts with a very typical movie scene of an escaped ape going crazy, trashing stuff, rebelling against its master, carrying off the girl, etc. and I thought, “my howdy do, that gorilla outfit looks extremely fake and did these editors not notice that you can see the actor’s human neck every time he swings his head upwards?  Maybe I’d expect this from the 1932 Murders in the Rue Morgue but certainly not from this!”  Then they reveal the said action is on a stage and I thought, “oh my!  You guys got me!”

There are more neat scenes like that which re-create what it must have been watching a horrific stage play, where it’s clear the wooden board with spikes on it is clearly fake but the audience who hadn’t been jaded seem legitimately shocked by the onstage events of torture and grue.  Then of course it’s even more shocking when something actually goes wrong, like when Herbert Lom’s character accidentally gets real acid thrown in his face and they have to stop the performance.

There are also some righteously debauched scenes of old-timey partying with them naughty burlesque women, wooo!  Jason Robards, who is supposedly a level headed and caring husband commits a no-no with the super hot whore played by Maria Perschy.  But the problem is is that act of moral indiscretion becomes somehwat meaningless since it wasn’t clear if it actually happened or if it was part of the dream thingy.

Oh, and if you’re into old-fashioned looking carnivals, this movie has tons of that stuff along with great performances from top notch actors and really sick looking burn makeup.  In other words, if you’re looking for an entertaining film of individual scenes and other cool stuff then go for it but if you’re looking for a movie that isn’t a complete mess and you need to have some closure at the end, then avoid this movie at all costs!