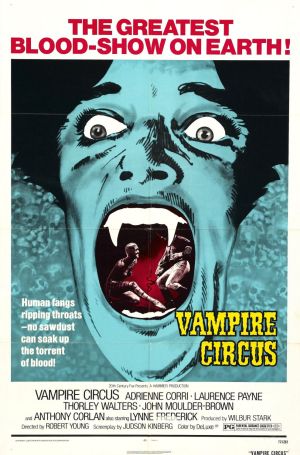 First of all, this: 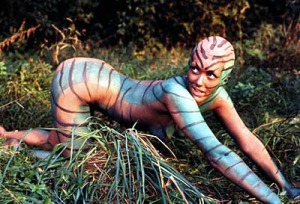 Second of all, Vampire Circus received a PG rating!  Unless scenes were cut for the American release, I can imagine the “hubba-hubba” elation I would have felt if I saw this movie in the theater as a little kid and can imagine my mom or dad angrily whispering, “turn your head, son!”

Vampire Circus is a later period Hammer film that loosely fits into their much steamier later period films such as Twins of Evil, The Vampire Lovers, Lust for a Vampire and Countess Dracula.  Notice they didn’t make Lust for Frankenstein or Frankenstein’s Sexy Nymphs because I don’t think there is any way to make a sexy Frankenstein picture.  And no, Frankenhooker wasn’t sexy.

In the prologue, a young, cute nymphette, Anna Mueller (Domini Blythe) runs to a castle to have a passionate romantic love affair with vampire Count Mitterhaus (Robert Tayman).  Both are caught by her husband Prof. Albert Mueller (Laurence Payne), who looks more like her dad (wonder why she ran way…).  Mueller impales the count but the count promises to get his revenge.  Afterwards Anna Mueller is brutally flogged by the town folk for her lechery and runs back to the castle, which the town folk then burn down.

Fifteen years later a plague has hit the town.  The superstitious people believe it’s the vampire’s curse but Prof. Mueller doesn’t believe vampires exist (after all, he killed the vampire but anyone would die from getting impaled, ya know?).  Then the caravan rolls in!

Led by the sexy Gypsy Woman (Adrienne Cori, who looks quite stunning with all that flowing red hair) and consisting of a painted up dwarf, a  strong man, two acrobatic types, a lion tamer of sorts, a naked tiger dancer and Emil (Anthony Higgins) who can shape shift into a leopard, the circus allegedly comes to bring the woa-begotten folk some joy.  They perform various circus tricks and it seems innocent enough – well, as innocent as a completely naked woman painted green with tiger stripes performing a sexually charged dance with the lion tamer in front of men, women and children can be – but soon things take a turn for the worst.

It’s revealed pretty early on that the circus hasn’t come out of good spirits but to avenge Count Mitterhaus.  What’s interesting is that not everyone in the group is a vampire; only the shape shifting Emil and the two acrobatic dancers.  The rest just do their cicusy thing, albeit maliciously.  Remember kids; dwarfs aren’t to be trusted!  The circus people do a variety of bad things whether it be traumatize an old man via a nightmarish carnival mirror, lure a group of people into a forest just to have the very same circus animals brutally ripped them to shreds and of course the standard blood sucking expected of the vampires.  In fact little kids aren’t even safe.

Which leads me to another point.  This movie has some weird overtones of pedophilia.  I dunno, maybe the vampires are just biting the little kids for their blood but, considering what vampirism has always implied, it adds a certain level of creepiness.  Otherwise though, Vampire Circus is an underrated little gem that deserves to be re-examined.  Hammer was going through some rough times financially which prompted them to think a little outside the box and this is a good example of that!