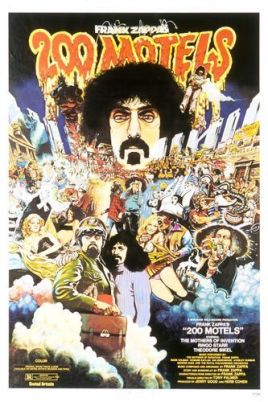 Happy 73rd birthday, Frank Zappa!  I like Frank Zappa a lot.  His music and attitude are partially what influenced me to start writing this blog in the first place.  Undoubtedly his snarky cynicism caused by the so-called “peace and love” and “counterculture” movements of the 60s give him the distinction of being a “savage hippie.”  He was a long haired freak but he was completely clean of drugs (except for the cigarettes) and laughed at both hippies and cops.   He voiced disdain for the system, the Vietnam war and people’s willingness to succumb to societal pressure and be mediocre while not supporting the left or right; he bashed goony institutions from all sides and encouraged people to think for themselves.  Above all he made some fantastic music; a hybrid of rock, doo-wop, free jazz, avante-garde, musique concrete and whatever other tricks he had up his sleeve.

In 1971, Zappa came up with the idea of making his very own movie about the life, trials and tribulations of a working rock band.  Unlike his music which, it seems, he took the utmost care to make note-perfect with state of the art equipment and top notch musicians, his movie, he apparently allowed to run slipshod into god knows what.  At least it seems that way.  A lot of people talk about how “way out” and “craaazeee” the movie is and how you need to see it all “fucked up” to get into it.  But actually it just reminds me of a cheaply filmed, Monty Python episode with less good skits and more dick jokes.

First of all it wasn’t filmed.  It was taped.  That’s the first thing the “film people” will notice when watching it.  Zappa, I guess is credited as director alongside Tony Palmer but I don’t know who was doing the real “heavy lifting.”  Second of all, as one might expect, there isn’t much of a story.  The movie didn’t really feel directed; it just felt like a camera was set up and some shit was allowed to happen.  Third and best of all, Zappa or Palmer or whoever, go crazy with the early video camera effects.  It’s so obvious how  the effects were created yet they still look cool; filters, layered film, rewinds/fast forwards, negative effects.  It’s so amateurish looking, high school kids would be able to use these same effects on their home video projects less than a decade later.   Also the sets are completely and obviously fake looking; it sort of reminded me of something in Forbidden Zone or a Guy Maddin film.

The movie features every member of the Mothers of Invention from that period; Ian Underwood, Aynsley Dunbar, George Duke, my personal favorite Jimmy Carl Black and Motorhead along with Flo and Eddie.  The best parts of the film are the performances, which were done live and are all top notch.  I also really liked the animated sequence which I will discuss momentarily.  Frank Zappa barely appears in the movie, instead opting to play guitar in one segment and drums in another.  The rest of the band do a bunch of stuff, none of it particularly interesting or worth mentioning.  Also Ringo Starr and Keith Moon have cameos and the Royal Philharmonic Orchestra perform in the film as well.

During the film we see topless groupies, a living vacuum cleaner, people with funny masks sitting in a fake saloon, Ringo Starr pretending to be Frank Zappa, Keith Moon dressed as a nun and threatening to overdose on sleeping pills while hanging with said topless groupies, idiotic discussions about the differences between dicks and penises and Jimmy Carl Black shooting at a target that says “hippies” on it.  I’m sure other stuff happened but I don’t feel like digging into my memory sack.  I feel a little embarrassed for Ringo, who is forced to talk about putting a genie’s lamp into a woman’s reproductive organ.  Come on, Zappa, you thought that was funny?

Now then, the animated sequence is easily the best part of the movie; it’s not the most original thing but it involves an acid trip, hippie mumbo-jumbo, Monthy Python-esque collage art and name-drops Black Sabbath and Coven.  I could easily see it as a standalone piece.  There’s really nothing else to say about the movie.  It’s not exceptionally funny nor does it really offer any true insight into the lives of working musicians.  The dialogue is apparently pulled from real life but, so what?  Really this movie is for Zappa fans because I honestly cannot picture the average person being able to stomach more than 20 minutes of it.