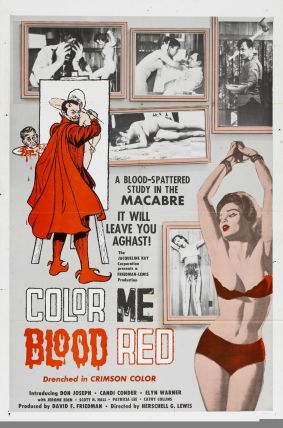 I don’t want to ruffle any feathers and cause any brain aneurisms at the thought that your entire world might be turned around by this ground breaking statement but Herschell Gordon Lewis is a lousy director.  Don’t get me wrong; I love his stuff and I’ve seen all his movies but they’re not any good.  Gordon has more or less said that he’s not aiming for any artistic merit but just to entertain.  And that’s the problem!  Unless he’s filling the screen with gore, violence, perversion or just nogoodniks doing nogoodniky things, he really sucks!

Case in point: Color Me Blood Red.  I saw this one a while ago and remembered it being way more entertaining but, upon second viewing, I was surprised by how boring this movie is.  80 minutes that seem interminable.  And I don’t want to turn potential viewers away from the films of H.G. Lewis by such a negative assessment so I’ll at least attempt to explain what Color Me Blood Red is all about and why I think it failed at doing what it was supposed to do.

After leaving the world of nudie cuties (which he’d later return to), Lewis with producer David F. Friedman set for the uncharted territory of wanton gore and splatter.  As evidenced by Blood Feast which caused a traffic jam upon its inaugural showing at a drive-in, it worked and Lewis/Friedman had a new gimmick to exploit.  And yes, Blood Feast, 2000 Maniacs, Color Me Blood Red, The Gruesome Twosome, The Wizard of Gore and The Gore Gore Girls are all very gross, bloody and gory; just as bad – possibly worse – than a lot of popular R rated slasher films.

The problem is that stuff has to happen between the gore sequences.  Lewis not only is lousy at his direction, which consists of home video quality photography that often sits on nothing in particular but also can’t build up suspense worth a damn.  I won’t bash the horrendous sound since he probably could only afford one boom mic.  This leaves only two things to enjoy; the hokey acting and the gore.  The gore movies especially are unique since, instead of horny teenagers who bang within 10 minutes of the opening credits, you get to see an immense level of gore juxtaposed with 1950s-early 60s “golly, gee whiz!” dialogue and action.  Color Me Blood Red just has way too much of the latter.

Color Me Blood Red is sort of an update of Roger Cormon’s artistically superior A Bucket of Blood.  In that film an artist killed people and covered them in clay, producing works of “art” for pretentious, know-it-all critics.  In Color Me Blood Red, the artist Adam (Don Joseph) uses human blood to give his canvas extra color.  Guess how he gets it.  Aside from the hilariously sickening scene of him passing out from using too much of his own blood, he begins to kill people and use theirs.

Unsurprisingly the local critics really love his work; violent, sick and daring!  Soon the body count picks up until a group of local kids gets wind to what he’s doing when they discover a rotting corpse on his beach side property.  Seems like a hoot, right?  It would be if there was more killing!  He stabs his annoying fiance, runs through someone with a harpoon on a motorboat and uses a woman’s lower intestine to color his canvas but there are just too many scenes of beach party bingo nonsense and goofy kids literally doing nothing.  They splash each other, crack corny jokes and frolic about but remain remarkably un-killed!  BOOORRRRIIIING!!!  And these are the annoying kids that I wanted to see get killed!  And he doesn’t kill a single one of them!  Arrrrghghgh!!!