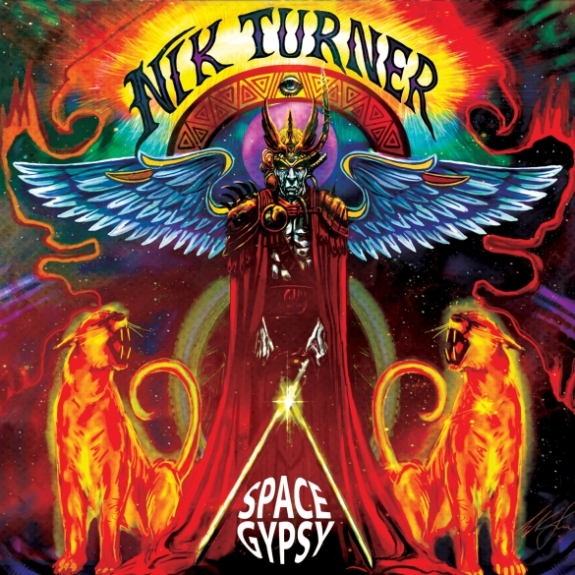 If you say retread, that sounds bad but if you say “going back to your roots”, then you’re in the clear.  I was supposed to see Hawkwind a few weeks ago because they were playing their first U.S. tour since I think 1999 and I had taken two days off work to travel to Cleveland and Chicago (three and four hours from my home and eight hours away from each other) but, because of this whole ordeal with Nik Turner, they cancelled.  So what was a I left with?  Nik Turner’s Hawkwind.  Sure it was scaled down considerably to fit inside the dinky little punk venue I was seeing it but, at very least, I’d get to see a member of Hawkwind performing classic tunes which I had never seen performed live before.  Sure it was basically like seeing a Hawkwind cover band since, of the 12 tunes they played, 10 were from the 1971-1974 era of the group but I suppose beggars can’t be choosers and he and his band were really in fine form.

Now, the band I saw live wasn’t the same exact band that recorded the Space Gypsy album.  The band I saw live consisted of former U.K. Subs guitarist Nicky Garratt along with Lana Voronina on keyboard/synths, Bryce Shelton on bass and Jason Willer on drums; on the album, the synths were played by Jurgen Engler, the bass was played by Jeff Piccinini and the violin bits were done by none other than former Hawkwind (not to mention David Bowie and probably some other people) synth/violin guy SIMON HOUSE!!!  How’s about that, eh?  It should also be noted that the Space Gypsy band minus Turner and House is also the current lineup for Brainticket, which is double plus good if you ask me!  Some of the others are in some band called Hedersleben and a whole bunch more but now we’re getting off topic.

Ah yeah, Space Gypsy, the new Nik Turner album.  Where do I start with this one?  Lessee… MAN is Nik Turner a prolific guy!  He should be given some kind of award just for being so cool!  This 73 year old, saxophonist/flutist/singer/songwriter has been at it for quite some time; from the early, druggy Hawkwind days, to his space punk band Inner City Unit, to his solo tour with HELIOS CREED (!!!) on guitar, to playing with Jello Biafra and Genesis P. Orridge… what a freakin’ pedigree!

And I don’t care what side of this whole Dave Brock/Nik Turner conflict you fall on because Space Gypsy is GOOD!  REALLY, REALLY GOOD!  But I’m not going to lie to you.  It’s not really all that original.  Oh sure, in comparison with the music on the radio, it’s mind blowing but you could say that about a lot of stuff in the underground and especially about early Hawkwind.  And, let’s face it; this sounds EXACTLY like an early Hawkwind record.  I mean, if you didn’t know it came out in 2013, you could easily seeing it being the album that would go between Doremi Fasol Latido and Hall of the Mountain Grill.  I’m not saying it’s Space Ritual Part 2 because it’s not a live album.  I’m saying if there was a transitional style between the more aggressive, headbangy “kraut metal” of Doremi and the slightly more calm and relaxing Mountain Grill, it would sound like Space Gypsy.

Turner and his band have put together one helluva stew of driving, distorted space riffs, psychedelic acid solos, wishing/wooshing space sounds, neato sax and flute solos, computer blip/bloop noises and Turner’s patented “space wizard” singing style that, in my humble opinion, sounded cooler than Brock’s straight forward, normal British bloke voice.  In fact, in spite loving his performances of the classic material, I feel he could have easily kept the crowd’s attention with these new tunes.

If you’re one of those “bands need to always be progressing” kind of people, you might be disappointed and would probably prefer the actual Hawkwind who try to stay up-to-date and evolve.  Opening track “Fallen Angel STS-S1-L” might as well be called “Brainstorm Part 2.111.XL.5.”  This trend continues on in “Joker’s Song”, whose lyrics, like many on the album, tend to border on self-parody – “I heard they ate the queen and government too/these creatures from outer space sure know what to do” – but I can’t help enjoying a song with such a damn good saxophone solo!  Next we have “Time Crypt” and what can I say?  It sounds like a song from Warrior on the Edge of Time which I guess shouldn’t be too surprising considering its name.  In fact, just like on that album, the next song “Galaxy Rise” is a pretty, mellow acoustic yet spacey tune complimented by Turner’s flute playing and the soothing sound of the ocean breeze and seagulls.  But here’s the real kicker!  Side one closer “Coming of the Maya” sounds like “Set Your Controls for the Heart of the Sun” by the Floyd!  Ain’t that a riot!

I don’t think I need to describe all of side two for you since song titles like “We Ride the Timewinds”, “Eternity”, “Anti-Matter” and “The Visitor” should give you a good idea of what to expect.  Some choice lyrics include “I am a visitor to your world/come to learn the secrets of your life/have traveled far from a dying place/an eternity of eons through time and space” and “I half awake suspended in time/drawn back into regression/of flashing lights and darkest nights/of other lives in quick succession.” As you can see, the ideas on Space Gypsy aren’t the most original; just the typical early Hawkwind meditations on time, space, matter and, I guess, anti-matter but damn it if the album isn’t consistently catchy and fun to listen to!