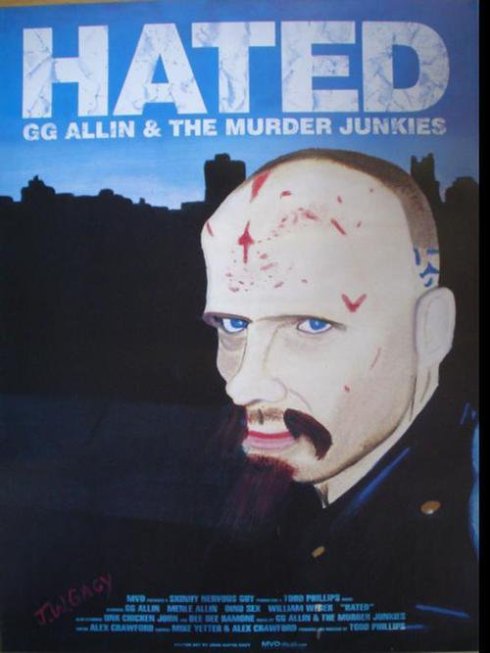 I’ve come to terms with my being a GG Allin fan.  I completely understand why people write off GG Allin as a talentless loser who shits onstage and doesn’t have very much to say outside of very basic attacks on society for making you do what you don’t want to do, etc. etc.  Yet, somehow, he managed to finagle members of Dinosaur Jr., the Butthole Surfers, the Dead Boys and the MC5 to play backup for him; even Dee Dee Ramone joined his band for two weeks before the reality of what he was getting into set in.

Well maybe he paid them.  Actually, probably not; there was no money to be earned from playing backup for GG Allin!  I don’t know where I’m going with this.  I’m probably like most of GG’s fans; where I was intrigued by the freak show and actually enjoy the songs but think the guy was just a very sad person who dealt with his problem through his alleged “mission.”  The craziest thing about GG Allin is how he got from point a to point b.  He didn’t ALWAYS take shits on stage and beat up unwitting audience members who thought that no matter how close they got, it was just a “show.”

Look at him on his first album: 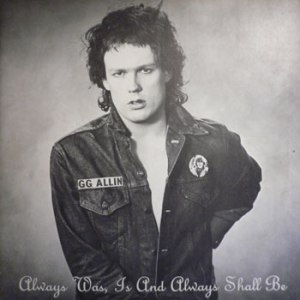 Look at him before he died of a heroine overdose:

He actually tried to start a real career, playing punk rock not too different from Stiv Bators or Darby Crash and singing delightfully poppy punk songs like “Beat Beat Beat”, “One Man Army”, “Bored to Death”, “Gimme Some Head” and “You Hate Me and I Hate You” with this backup band the Jabbers.  They apparently became really annoyed with how he wouldn’t let many performances transpire without doing something to get the plug pulled on them.  And I’m talking normalish shit like messing with audience members, pouring drinks on people’s heads, not too different from what Sid Vicious would have done.

Then something happened; some say it was his divorce, some say a bad hit of acid, some say his bipolar and antisocial personality disorders came to fruition buuut… according to something I read, GG Allin first pooped on stage in the middle of 1985 and thus carried on, touring on Greyhound buses, finding musicians that know his songs and doing lots and lots of drugs.  Eventually the party ended in 1990 when he went to prison on assault charges and was forced to go through the awful experience of being sober.

Regardless it’s still entertaining to watch gig footage of GG pooping on stage and punching two audience members (apparently breaking both of their noses!) while performing “Die When You Die” before the cops came and busted up the show.  We also get to watch a GG performance art piece at a New York college where he gets completely naked, shoves a banana up his anus and tries to convince audience members to also take their clothes off.  I absolutely did not approve of when he was doing a spoken word performance in 1988 and started beating up some woman who tried to confront him face to face.  I suppose, if she sat where she was in the back, she would have been fine, but the real question is what GG Allin hoped to gain by being such a dick.

There are also some neat interviews with past and present members of the Murder Junkies including his older brother Merle, who seems way more normal and nice in spite of his, ahem, Hitler mustache (or is it a Chaplin mustache?).  Funny how the drummer, whose name I forgot, seems more like a peace loving hippie guy than an outlaw scumfuc, asshole and calls GG Allin a “beautiful person”, I’m not kidding.

The most interesting interviews are not with GG, who just spouts off about how free he is in spite of society trying to make you a slave, but with former guitarist Chicken John and a typical GG Allin fan.  Interestingly both seemed to have the same interpretations of GG’s “act” but with strikingly different opinions.  The former called GG a moron and a clown who is just boring and has nothing to say, claiming, “I can hit myself with microphones too!  It doesn’t hurt that much!” while the latter is more like me; probably another geek-show lover into mondos, Faces of Death, real crime books and anatomy photos and wanted to see some real sick shit up close.  He also calls it comedy as do I.

I feel like if GG played it slightly safer, not shitting onstage, beating up audience members, burning every bridge, doing a ton of drugs and actually writing a few songs that weren’t just vulgarity upon vulgarity then he might have made a halfway decent career in the outlaw, biker, scum punk scene.  In fact Jeff Clayton from Antiseen filled in for GG in the Murder Junkies shortly after his death and people were disappointed that they didn’t see Clayton pooping on stage or raping audience members.  The GG Allin-less Murder Junkies were forced to do it the old fashion way; how sad to not have a frontman whose behavior prematurely ends your set every time you play.