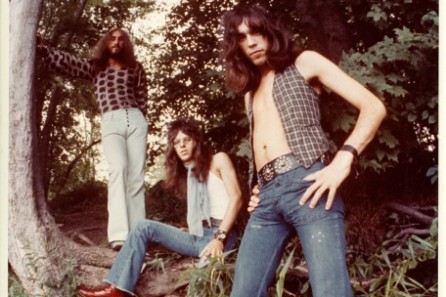 I’m assuming most of the intrigue for searching out Dust comes from Marc “Marky Ramone” Bell being in it years before he drummed for Wayne County and the Backstreet Boys, Richard Hell and the Voidoids and, of course, THE RAMONES!!!  The other two guys in Dust were guitarist/singer Richard Wise and bassist Kenny Aaronson, who also played a mean pedal steal guitar.  Wise later joined co-producer Kenny Kerner to produce Kiss and Aaronson became a session musician for a whole lot of people that I’m not going to mention.  Dust made two albums and that was it. 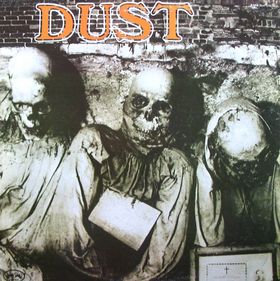 If you found the double LP reissue set containing the self titled Dust LP and their second album Hard Attack packaged together and on the plastic there was a sticker that read “the roots of American metal”, that is a lie, my friend!  Do not think for a second that the group Dust is an undiscovered, underground gem in the same vein as Pentagram and have a bunch of heavy, Sabbath doom riffs and horrific themes because you’ll be disappointed beyond belief.  Sure the cover looks scary but it’s a facade.

The album immediately blows apart the “American metal” myth with opening track “Stone Woman”, which rides along on an upbeat funky groove, complete with slide guitar.  One thing you may ask yourself when you hear this fun opening tune is, “how is that the same guy who drummmed in the Ramones?”  His snare dominated patterns and non 4/4 rockin’ make it clear that the music of the Ramones was way below his skill level.  Side two opener, “From a Dry Camel” is the aforementioned heavy, blues rock trudgery.  It’s similar to “Dazed and Confused” except the lyrics are really weird and it later picks up into a galloping beat.

So yeah, I don’t need to describe every song.  The lyrics are about typical rock subject matter; love, lust, roamin’ ladies and sucking water from a dry camels hump.  The guitars are beautifully loud and have various tones and Wise sings in the same high pitch 70s style as Mark Farner.  I mean, what’s there to say; this is proletarian hard rock to bang your head and/or fist to, so get to it man!

Kind of looks like a Molly Hatchet album, doesn’t it?

Not only is the title for this album a stupid pun, it’s a complete lie!  Just like the sticker that says, “The Roots of American Metal”, this album is not only not metal, it’s not even hard rock!  The album begins with acoustic guitars and though the song “Pull Away/So Many Times” picks up the energy into an acoustic/electric gallop, it’s still not hard rock.  Furthermore the album proceeds to get lighter as we go along so that, by the time we’re on the third song, “Thusly Spoken”, we’re hearing an acoustic guitar/keyboard/piano/strings ballad!  “Hard Attack” my arse!

But, hey, here we go!  The fourth song, “Learning to Die” is a hella energetic hard rock song, who’s opening melody sounds like the Twilight Zone theme before proceeding into the main riff then a lighter, scarier part.  Then the eerie part goes away and we’re back into energetic rock ‘n’ roll zone!  Is this supposed to be social commentary?  “Every man learns to die/he has to leave his jewels behind”?  I dunno, whatever.  This song kind of reminds of Blue Oyster Cult with all them minor notes.

I already mentioned the group’s playing ability; guitarist Richard Wise and bassist Kenny Aaronson are perfectly fine on their instruments whether they’re playing electric/distorted or acoustic and, of course, Marc “Ramone” Bell is playing way more technically advanced stuff than he would in the Ramones.

Arrghh, now we’re back into acoustic zone with “I Been Thinkin’.”  In case you’re wonderin’ (ha!), I am reviewing the album in real time as the songs come.  I have listened to it a couple times before but I kind of enjoy this play by play approach.  Oh, hey… another hard rock song that starts off with some killer snare attack, some slides on the neck, then soloing, then three chord riff, then more soloing and it appears by the song’s set up, that “Ivory” will be an instrumental.  Some of these solos sound Toni Iommi-ish in parts.

Then one more acoustic, countryish ballad and one more, mean hard rocker with some honestly killer, angry riffs and more neato fills.  That’s the album for you.