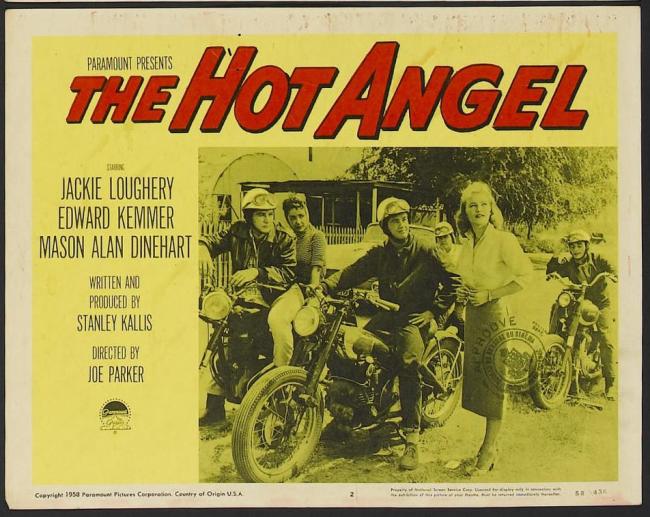 I don’t have too much to say about The Hot Angel.  It’s certainly not a biker film and only barely touches the juvenile delinquent category.  At 72 minutes it’s short enough and passable but to be sure it’s very wholesome and not mean spirited.  Some of the lines include “nobody chooses to be a hero” and “if you have your head in the right place and look to the man upstairs” and crap like that.

The plot concerns a Korean war flyer named Chuck (Ed Kemmer) and plans to take a job flying over fields and scoping out uranium – I didn’t quite pay attention to that part.  His buddy that he served with died and that guy’s younger brother Joe (Mason Alan Dinehart) got involved with some local nogoodniks who’s crimes include stealing hubcaps and playing chicken on their hogs.  Chuck convinces Joe that flying is more honorable than riding around committing crimes and this doesn’t fly with the old gang.  But there are also some double dealings as one of the gang members and his dad are double dealing in the uranium biz or something.

Then a bunch of improbable stuff happens involving locking people in a shed and some creepy guy who tries to rape Joe’s main squeeze, blonde bombshell Mandy (Jackie Loughery) and some knives are pulled and some punches are thrown but the main thing in the movie involves flying airplanes into deep canyons and crap.  This review sucks.  It’s my third today.  Sorry.

Oh, you know what!  Let’s talk about iron crosses!  You see, a lot of people are intimidated by them.  They are essentially a neutral symbol.  Bikers use them to look tough.  Flyers use them as medals of honor.  And, yeah, the Germans used them during WWII.  But they’re okay and pretty neat looking.