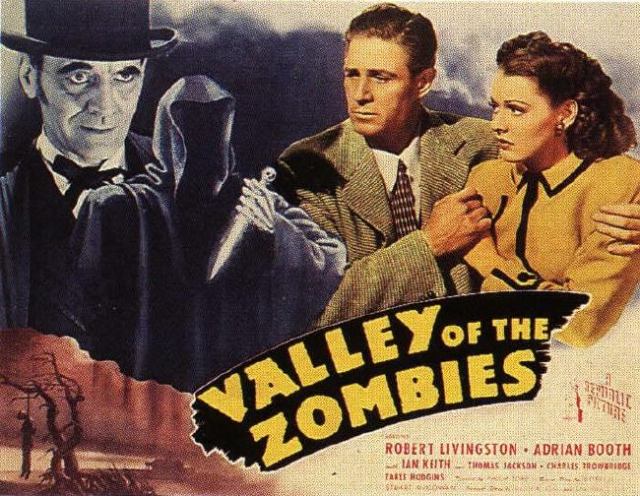 Nice poster, nice title but no valley and no zombies.  Not to mention no budget either.  I don’t have that much to say about this 56 minute quickie (as they used to call short movies back then) except that I wish the bad guy was played by Boris Karloff and not Robert Livingston.

The plot concerns Doctor Terry Evans (Livingston) killing people and using their blood to stay alive.  Most of the movie is just a police procedural with the film’s two main characters Fred (Earl Hogdins) and his wife/fiance Nurse Susan Drake (Lorna Gray) trying to prove their innocence after being in the scene of the crime.

If you must know the background, Dr. Maynard (Charles Trowbridge) wrongfully (or rightfully, I forgot which) diagnosed Evans as being insane and had him sent away to the looney bin, where he apparently died except that he didn’t and found some way of chemically sustaining his life.  Only he must constantly refill himself with blood and thus kills people to do so.

During most of the film the two protagonists do their own detective work Thin Man style since apparently the cops are too stupid to do it themselves.  They explore creepy houses and mausoleums while the guy leads the charge with total bravado and the girl, of course, acts frightened every time she turns her head.

But indeed, I was disappointed that the movie had no zombies.  I was hoping that Livingston would play a voodoo master.  He looks cool with his thick eyebrows, top hat and cape and he does hypnotize the leading female but, ultimately, there wasn’t enough going on even for a movie this short.  Now those RKO “sophisticated” low budget horror pictures like Cat People, The Body Snatcher and I Walked with a Zombie were good at “not showing” everything but this Republic picture ain’t like that.  It doesn’t show much and doesn’t have creepy atmosphere.  I still like some of the sets though.