I don’t know what the Troma team is waiting for but it’s time to give The Love-Thrill Murders a full DVD release because it is easily one of the finest films in the Troma library.  The film originally came out in 1971 with the title Sweet Savior and somewhere along the line, it was also called Frenetic Party but Troma made the correct choice by calling it The Love-Thrill Murders when they distributed it a few years after its initial run.

The Love-Thrill Murders is a somewhat fictionalized account of the Tate killings perpetuated by Manson family members.  I say “somewhat” because director Bob Roberts followed some of the details but, to make the story work, changed a few of them, like having the Manson like leader Moon (Troy Donahue) present at the Tate killings which, of course, weren’t called the Tate killings in the film.  Roberts wasn’t trying to make a straight, documentary retelling of what happened but instead to explore the makeup of the cult, the characters within and what drives them to follow their leader, who is nothing more than a long-haired degenerate.

People claim this is an exploitation film and, in a way, it is but it’s going for more than just cheap shocks.  It actually is a well made film that is pretty disturbing.  Troy Donahue does a convincing job in the role as he leads a group of hippies from drugged out parties and orgies to eventually commit the murder at the end of the film.  The plot is pretty simple.  The cult initiates a new recruit, the hippies have sex and do drugs of all kinds then plan the killing of Tate like actress Sandra (Renay Granville) and her swinging group of friends at a party.

While Moon is the main character, he’s obviously just a one-dimensional manipulator, using or rather perverting Christian symbols and rituals to his own need.  That’s an interesting detail; that the ceremonies, despite only referring to the cross and Christian mythology look more like Satanic rituals.  After all, what kind of Christian ceremony  incorporates sex on an altar?

But the other character the movie really focuses on is the above-mentioned new recruit.  I wish I could remember her name but the IMDB credits are no help since they don’t have pictures.  But basically she’s a confused, run-away kid looking for acceptance among this new, hip group of people.  And it stands to reason she has no particular sociopath tendencies.  In fact it’s easy to tell she doesn’t exactly feel comfortable with all of the stuff Moon wants her to do to prove she’s with it.  Her desire to fit in eventually leads to the film’s disturbing climax where we witness how far peer pressure can lead a person.

The rest of the kids do anything he tells them, including an early scene where the girl and her friend pick up a local dealer and give him oral sex in exchange for drugs.  One of the kids is Squeagie who is played by none other than Lloyd Kaufman, weee!

On the other hand, the actress Sandra and her bunch try to live up the modern, swinging late 60s/early 70s lifestyle and want to party with the freaks.  Among the group is a particularly flamboyant homosexual whose role is somewhat comical if a bit stereotypical; he gets disgusted by the word “cunt.” 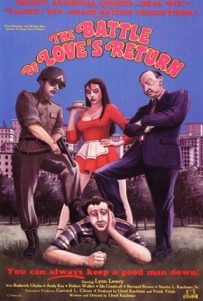 Remember how when I reviewed Lloyd Kaufman’s first film, The Girl Who Returned, and I said the main reason I gave it 3 out of 4 is because I was just so excited to see an early student short from the creator of the Troma universe (don’t get me wrong, I still liked the film but don’t know how much many others would)?  Well, in this case, the 3 out of 4 grading comes from more of an objective viewpoint (well, as objective as you can be when you’re expressing your own opinion but still).  I actually do recommend the film provided that you know these two caveats: Lloyd Kaufman is a shitty actor and The Battle of Love’s Return is a Godard/Brecht inspired “art film.”

I use “art film” in ironic quotes more to attack the notion of the “art film” rather than to say that The Battle of Love’s Return isn’t art, get me?  In spite the humorous looking poster, this film is comedy in the loose sense.  There are funny moments but the overall objective, I do not think, is just to make you laugh or something.

But first, before we get to it, let me explain something.  The common folk view Troma as a z-movie company who offer nothing more than a few cheap laughs from lousy films.  The slightly more astute film watcher catches that Lloyd Kaufman is actually a good filmmaker and employs his knowledge of film history in his work, often making inside references such as the Buster Keaton gag in The Toxic Avenger Part III: The Last Temptation of Toxie, where the Toxic Avenger attempts to kill himself by standing in front of a tunnel anticipating getting hit by an automobile only to realize the approaching headlights come from a pair of motorcyclists who pass by on either side of him.

And then there are assholes such as me and some French people who go as far as to call Kaufman’s work Brechtian.  YOU might excuse the lack of continuity, non-seamless direction and cheap special effects as bad film making but I give my man the benefit of the doubt and say some of that is deliberate.  Or as Lloyd Kaufman once put it; “continuity is for pussies.”

So what does this have to do with The Battle of Love’s Return?  Well the film jumps back and forth between the minimal narrative to interviews with the actors.  The interviews are shot in black and white and you can hear the crew yell at Kaufman during the filming of these scenes.  The story concerns perpetual loser Abercrombie (Kaufman), who struggles at every turn to fit in, do a job correctly or just win the affections of “Dream Girl” (Lynn Lowery) who angrily calls him a joker after he attempts and fails to operate an elevator.  Elsewhere Abercrombie tries to help an old lady cross a busy street and in turn, receives her abuse.  At other times he tries to join a group of hippies and the military only to be rejected by both groups.

The narrative portions are okay but the meat of the film comes from the interviews some of which include Lynn Lowery pre-Shivers, a hippie beatnik street poet, a Socialist party member turned preacher, an adult bookstore owner and an old lady who immigrated from somewhere in Eastern Europe (I forgot the specifics since it’s been a week since I’ve seen it so I apologize for that one).  There were probably a couple others I don’t remember but I’m reproducing this from memory so don’t shoot me if I forgot anyone.

And, again, if you’re on the Easter egg hunt, look out for a young Oliver Stone somewhere in this movie.