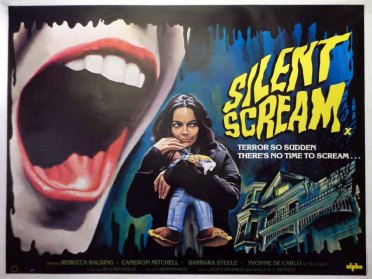 According to someone on IMDB, The Silent Scream grossed $15 million at the box office.  Really?  I’d never heard of it.  No matter though.  I really wanted to like the movie and it looked as though I was definitely going to but, unfortunately, someone dropped the ball in the third act.  I would like to think there was some sort of time or budgetary restrictions and that the blame can not be placed entirely on director Danny Harris because, if that is the case, then Harris needs to back to film school 101 or something.

The Silent Scream apparently was marketed as a slasher but it’s more just a horrific thriller with very little killing or violence.  Other than its being a supposed slasher, the film’s other main draw is Barbara Steele and Yvonne de Carlo, both of whom do fine jobs in this movie.  In fact every actor does a good job with the movie as does the director in the first half or so.

The set up is well made if pretty standard but the plot doesn’t follow any of the genre cliches such as “sex = death” that are so typical to slashers.  Scotty (Rebecca Balding), Peter (John Widelock), Dorris (Julie Andelman) and Jack (Steve Doubet) are college students who move to a creepy mansion being rented out by Mrs. Engels (Yvonne de Carlo) and her geeky son Mason (Brad Reardon) for the semester.  I was fairly impressed by the characterization and the acting; not half bad for this type of movie.  All four college kids have their personality quirks and the movie builds that up – perhaps a little too much.  For instance the romance between Scotty and Jack goes on so long that it makes the movie seem more like a drama than a horror film.

The shocks start right where they should when the first kid is picked off while drunkenly passed out on the beach.  This inevitably leads to a police investigation and the tone of the movie turns towards the horrific.  So far, so good, right?  But then, the ball is dropped.  Way too much time passes until the next person is killed; albeit the kill is juxtaposed with a sex scene and the moaning and groaning occurs in tandem with the stabbing so that’s a neat trick.

But then the film delves way too much into past events and apparently just begins to reveal information way before necessary, stripping away any possible shock or twist that would occur.  It would have been way better if the Barbara Steele character wasn’t revealed until later in the movie in a Psycho-like twist.  But, alas, we see flashbacks of her attempting suicide and being taken to a psyche ward and other bits of history which are revealed to no useful end.

The end result is anti-climactic.  We’re not quite sure who the true villain is and all we really know is that the college students happen to be innocent bystanders in a family’s past squabbles, something to do with a father that was killed and some other such nonsense.  It’s unfortunate that whoever was involved couldn’t have stepped back and seen what they were making and asked what the point was.  There are a few great scenes but it doesn’t really add up to much.