I admit I’ve been on a Satan kick lately.  No I don’t worship the devil nor have I read the Satanic Bible or think of Anton LaVey as anything more than a huckster.  I just think the devil or Satan or Lucifer or Beelzebub is a cool looking, evil scary guy with horns and a tail but damn was the movie going public obsessed with him from the late 60s right through most of the 70s!  Hell I can’t get enough of him!  It’s kind of surprising how many films were made about the devil during this period.  I just downloaded Eye of the Devil, Race with the Devil and The Devils today!  So here we go with reviews of three different movies, which, if nothing else, could serve as a way to compare and contrast the different ways ol’ Lucifer has been handled on screen. 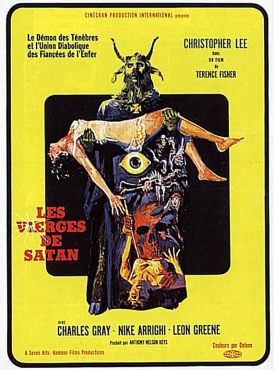 Our first picture is, in my humble opinion, the weakest of the three devil pictures up for review.  How is it possible to rate The Devil Rides Out, a Hammer film, as anything but a piece of classic horror?  Believe me I REALLY wanted to like this movie.  The poster is enough to make you drool for the devil, right?  And that image IS in the movie so what’s the problem?

Terence Fisher directs it just fine and Christopher Lee is great as always but the main problem is that The Devil Rides Out is handled with the same classic, gothic and melodramatic approach used on classic Dracula and Frankenstein movies and contains a standard “good vs. evil” plot even though the film takes place in the present.  That renders the characters pretty dull as there’s no nuance to any of them.

You just have the good guys, Nicholas (Christopher Lee) and Rex (Leone Greene), visiting their old buddy Simon (Patrick Mower) and soon discovering that their old chum has joined a coven and practices black magic.  The rest of the film involves the leader of the coven, Mocata (Charles Grey) attempting to hypnotize the rest of the cast in order to collect souls to sacrifice to the devil.

I’m not saying I hated the movie; it was perfectly fine.  The Satanic concepts are hilariously literal; we see the actual horned devil (who looks cool as heck, mind you), the angel of death and some other demon type thing all summoned in the flesh and, in order to destroy these creatures, Nicholas or Rex literally throw crucifixes at them.

The film was given a G rating so, in spite being about the devil, the good guys triumph in the end and there is pretty much no gore in the entire movie.  With that said I still thought the Satanic coven sequence was pretty darn cool. 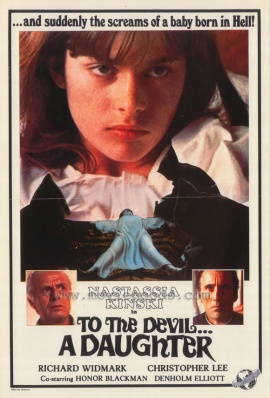 Next up we have To the Devil a Daughter, which I absolutely loved!  To the Devil a Daughter was made right at the end of Hammer’s existence.  I believe they might have made one or two other films after this before closing up shop.  But, if they had continued to make freak fests like this, who knows how far they could have gone into the next couple decades?  Unlike The Devil Rides Out, To the Devil a Daughter takes things in a completely odd and twisted direction.  Those of you who are more astute than me might have been able to pick out the twist early on and I had my inclinations but that didn’t stop me from going along for the ride!

Let me start from the beginning.  In the prologue we see Father Michael (Christopher Lee) being excommunicated from the Catholic Church.  This immediately piqued my interest because I wasn’t sure if Christopher Lee was going to be the good guy or the bad guy.  And BOY did I find out!  Fast forward 20 years and Father Michael is now the head of a congregation and we see him being chummy with the nuns in a local convent among whom include a young nun named Catherine (Nastassja Kinski).

After that we’re introduced to an occult novelist named John Verney (played wonderfully by Richard Widmark), who makes money from arguably bogus, sensationalistic devil books and is signing said books in some modern art gallery in London.  Verney meets a neurotic, nut job named Henry Beddows (again played wonderfully by Denholm Elliot), who convinces Verney to meet his daughter Catherine at the airport and take her in his care, which he inexplicably does because apparently Beddows is being chased by cult members for going back on a deal with the devil.

And from there the mystery begins to unfold as we learn some disturbing facts about the convent that Father Michael was the head of, the nunnery in which Catherine was raised and the twisted plans they have for Catherine.

Unlike the G rated, family friendly The Devil Rides Out, To the Devil a Daughter goes right down to the gore (albeit briefly) with the murders of a couple tertiary characters and a full on Satanic ritual orgy sequence.  Furthermore, if you didn’t already guess, it has a killer cast!  I already mentioned it but Richard Widmark does such a good job remaining reasonably skeptical even when witnessing the power of the devil, Denholm Elliot turns into a complete, paranoid wreck and Nastassja Kinski plays the naive, innocent role very well.  Christopher Lee is Christopher Lee, hamming it up as if he’s still in a classic era Hammer picture rather than one set in 1976 but the old timiness works within the context of the film. 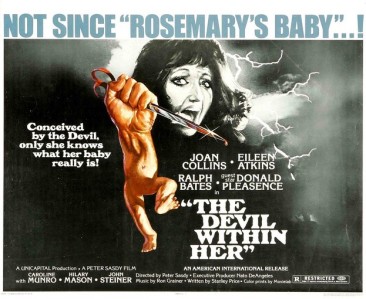 Though not a Hammer production, The Devil Within Her features Hammer people both in director Peter Sasdy and actresses Joan Collins and Caroline Munroe.  So, if The Devil Rides Out was underwhelming and To the Devil a Daughter was awesomely awesome, I’d say The Devil Within Her is just plain silly.  Most people would consider it the worst of these three films but I’m not most people and I got a major kick out of it even if it was for the wrong reasons.

Also a lot of people compare it to Rosemary’s Baby and that’s just plane foolish and wrong.  The movie begins with the birth of the devil’s baby.  And no, it’s not a spoiler.  We know from the beginning that this little tyke is one mean, nasty son of a bitch (or rather the son of a cheating, lying whore as the plot will reveal!).  From the moment the mother and father try to coddle their baby, junior bites, scratches, punches and kills anyone who tries to get close.

His weakness?  Ugghhhh… crucifixes and Catholic prayer.  The main character is a former burlesque dancer named Lucy (Joan Collins) (so where the hell does Sharon’s Baby come from???) and her husband is the suave, sexy Italian Gino (Ralph Bates), who apparently wasn’t suave and sexy enough since it’s revealed that Lucy had an affair with the burlesque theater manager Tommy Morris (John Steiner) and thinks the baby might be his.

Then there’s the midget Hercules (George Claydon), a creepy little bastard who made moves on Lucy and is vaguely implicated in having something to do with the baby being the devil’s kid.  Little of it makes sense so it’s best to turn your mind off and giggle as we see a little baby punch a man in the face and the man react angrily rather than startled or watch the same little baby decapitate someone with a shovel.

I could mention something about Caroline Munroe but it seems as though she was only put in the movie to look cute and chew the scenery.  And that about covers of it.  This is my 100th blog post.  Hail Satan!