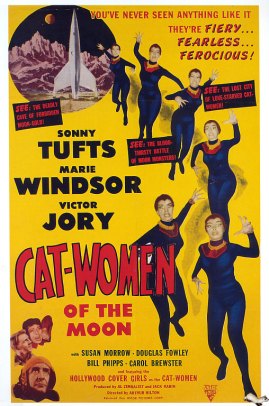 Pear-shaped girls in leotards running around on a sound stage that’s decorated with fake rocks and with an obviously painted space background and you expect me to not like Cat-Women of the Moon?  Apparently someone thought this concept was so good that it was remade shortly after as Missile to the Moon and to some extent as Queen of Outer Space.  Clearly the film is the product of someone’s fetishistic mind set because otherwise, how can you explain a plot in which a bunch of sex starved humanoid women want to keep a bunch of men captive on their abode even if the men are middle aged and overweight?

What also saves this schlock-fest from turning into a suck-fest is something that many producers, writers and directors seem to have forgotten in the years following the drive in, quickie science fiction film.  You ready?  IT’S SHORT!!!  When your plot is paper thin and the only things holding it together are some mediocre actors and some neat visuals – both the hot women and the neat set designs – it doesn’t hurt that the movie is only 64 minutes long!

It’s also fitting that I watched Cat-Women of the Moon on what I guess was Star Wars day because it shows where my radar is at.  I cannot stand Star Wars and its overly earnest, adventure, science fantasy bullshit but a movie like Cat-Women on the Moon or the other hundred or so science fiction films from the 50s and 60s that I’ve seen will do nicely, thank you!

The movie gets going right away as we see a space crew consisting of four nondescript, middle aged male astronauts and their cute as heck female partner Helen (b movie starlet Marie Windsor) sitting in a neat looking, rocket ship control room, blasting off to the moon for some reason which I forgot.  When they get there, they’re confronted with not one but TWO spider puppets that hang from the ceiling on strings!  After a bit of wandering around the sound stage, they encounter a temple or palace with an underground civilization of said leotard wearing nymphos and that pretty much covers it.

Oh there’s some romance, some intrigue and even some fighting amongst a couple of the male members of the crew because this was the 50s and men fought over women but otherwise, there really isn’t all that much else to say about Cat-Women of the Moon except some of the main “cat-women” have names like “Alpha” and “Beta” and one of the crew members shoots a couple of them dead with his gun.  That’s right, his gun, which he took with him to outer space “just in case.”