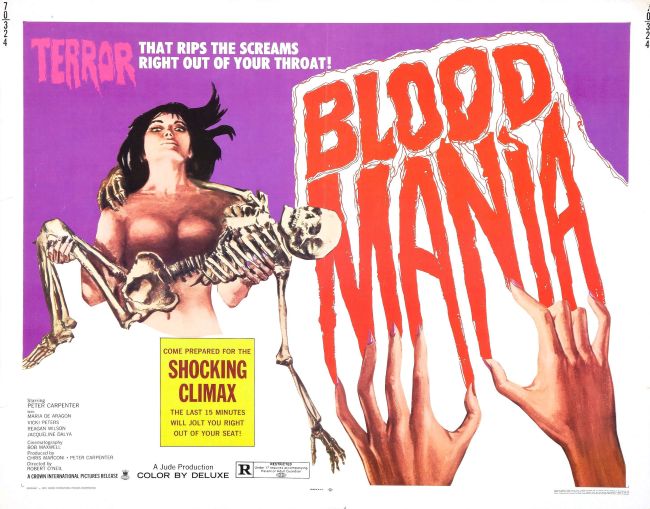 More like Crud Mania if you ask me, yuck yuck.  This movie totally blows and delivers nothing even close to the alleged “shocking climax” that is advertised on this here poster.  In fact, the little netflix envelope claimed the movie was going to be “gory” but I think the guy writing it meant to say “boring” because, blah blah, etc…

The bottom line is; don’t watch this movie, it sucks.  And when I say that, that actually means something since I’ll watch practically anything.  I thought I was in for a real treat since the movie has a really cool title sequence in which a scantily clad young lady is running away from a psycho-stalker all under an awesome, psychedelic sepia tone followed by animated blood splattering out the name of the movie in a manner similar to the poster above.

And, ya know, that’s okay!  There was a fair amount of flesh to look at and it was stylishly shot, I suppose.  And I love trashy European looking films especially if they’re from Europe.  So, if you’re the type of person who likes to just look at stuff and doesn’t care if anything actually happens, you might dig this film.

But, in my case at least, if a film is advertised as “gory” and only two people get killed – one of which was by forced amyl nitrate overdose – then I feel I didn’t really get what I asked for.

Just for shits and giggles, I copied and pasted a review from an IMDB user so, if you actually want to know what the movie is about, read further.  He (she? it?) pretty much gets it right except for the “isn’t as bad as I’d read”, “there’s plenty of plot twists” and “worth a look if you’re open-minded” part.  It ain’t worth jack shit and I’m very open-minded!

Stylish film noir-like thriller concerning a dashing doctor (Carpenter) whose medical practice owner (Allison) is bed-ridden following a heart attack, his daughter (De Aragon) a seductive vixen with a psychotic streak and a penchant for mind altering substances is eager to sink her claws into the virile Carpenter, but he’s already got his hands full with another lusty companion (Wilson). De Aragon paints bold, expressive canvasses, has lots of sex and looks dazzling in the buff. She also agrees to help out Carpenter after he’s blackmailed for having been a backyard abortionist, a stain that threatens his career, but the grand plan they conjure begins to unravel when her little sister (Peters) returns to claim the inheritance.

Funky, psychedelic sex soap opera isn’t as bad as I’d read; it’s not so much “blood” as it is “mania”, and there’s plenty of plot twists and diversions to keep you engaged. Carpenter isn’t the best actor, but he’s charismatic and has the charm to pull it off, as his character digs his grave ever deeper with each carnal lapse, while De Aragon, Peters and Wilson are three impressive specimens in spite of their apparent amateurish acting (De Aragon does improve as the film progresses, her ‘mania’ is at times quite chilling). Leslie Simms is sometimes amusing as an ugly duckling nurse and Alex Rocco gets a few frivolous moments as an estate lawyer. You’d also have to appreciate the minor yet absorbing role played by Dalya as Peters’ loyal lesbian minder.

The soundtrack is a hybrid electronica, progressive rock sound, a fusion you’ll either find petulant and irritating, or fitting with the offbeat nature of the film. Overall, I like it – it’s cheap, dated and clichéd (it also ends quite abruptly), but it remains a sensory attraction with plenty of effort displayed in light, sound, sets, cinematography (some credited to Gary Graver), costumes and colour, not garish or gaudy when taken in its temporal context. Worth a look if you’re open-minded.