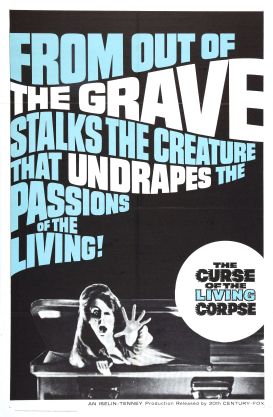 Now that’s just ridiculous.  There is no creature that “undrapes the passions of the living” in The Curse of the Living Corpse.  It’s clear from the first stalk and kill sequence that the menace of the movie’s namesake is just a guy with a hat and cloak and that there are no supernatural elements in the film.  To be honest, though, two crosses seems a little low for a movie which had some pretty neat sequences but three seems a little high for a movie I didn’t enjoy all the way through.  If any of you loyal readers can render me an image of a “half cross”, then I’ll amend this post by using it!  Thanks in advance!

Coming from the same Del Tenney double feature DVD as The Horror of Party Beach, I was little a disappointed that The Curse of the Living Corpse didn’t give me the same charge as the other film.  It was going places at first but sorta began meandering into needless comic relief and endless scenes of nothing going on, which strung together the few gory and suspenseful sequences.

The plot is pretty basic; set in New England in 1892, a rich man’s heirs stand to inherit his will given that they follow his post death instructions properly.  Of course none of them do and allegedly, the old man leaves his grave and begins picking off his ungrateful, unruly kids, their spouses and some other hangers on one by one.  This group of WASPs includes the non-WASPy Roy Scheider as a smart ass alcoholic named Philip, Philip’s brother and failed doctor Bruce (Robert Milli), Bruce’s main squeeze who I think is played by Linda Donovan, Philip’s wife Vivian (Margo Hartman), Philip’s and Bruce’s mother Abigail (Helen Warren), the caretaker Seth (J. Frank Lucas) and some other guy whose name I forgot.

The film is made well and has some neat sets, primarily the tomb where the father’s body is kept and the old looking mansion they all live in.  The kill scenes are superb; you get a head on a plate, a bloody face, a live burning and a bathtub drowning and some of the characters are completely, hilariously self centered, especially Bruce, a domineering, womanizing pig.  So yeah, it’s fun watching them get picked off.

What’s not fun is the sort of meandering, roundabout way in which the events happen.  They need to make this shit snappy, come on!  Also, what’s with the goofy cop who accidentally handcuffs himself and gets coerced into drinking booze, passing out and waking up hungover?  How is the film supposed to keep its sense of creepiness and suspense with all that tomfoolery going on?

Oh well, it’s not perfect.  On the plus side, there’s some borderline nudity in the bathtub scene.  In the U.S., official “above waste” nudity is constituted by the exposing of a nipple or two, which didn’t happen due to the way in which Margo Hartman was positioned in the bathtub; if she just sat up a bit… also the twist at the end does come as a surprise.  I just wish the movie was more evenly and quickly paced.