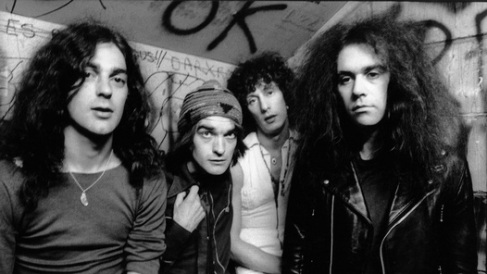 The Pink Fairies were an offshoot of the Deviants and emerged from the same bohemian/anarchist Ladbroke Grove scene from which Hawkwind, the Edgar Broughton Band and a whole bunch of other “anti-establishment” rock bands came from.  I used ironic quotes because, for all the press the Pink Fairies received for being anarchists, they sure as hell didn’t sing about this topic or even use social satire like the Deviants did.  I’m aware they set up free gigs and were considered a band of the people but, when your most popular song is about a certain male organ, it’s hard to really think of them sticking it to the man. But I like ’em though and isn’t that what counts? 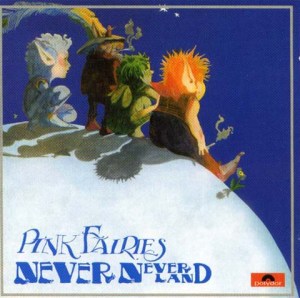 The original lineup for the Fairies consisted of former Deviants members Paul Rudolph (guitar/vocals), Duncan Sanderson (bass) and Russell Hunter (drums) along with former Pretty Things drummer John “Twink” Alder as a second drummer, I guess.  I never quite understood that.  His presence isn’t really felt and it doesn’t really seem to matter but, he’s there and that’s that.

So the biggest thing that got me interested in the Pink Fairies is their direct connection to Hawkwind and Motorhead.  But they certainly sound nothing like the former and only vaguely like the latter.  For better or worse, they’re just a solid rock band.  Or if you like parallels, they’re the MC5 to Hawkwind’s Stooges.  If the Stooges were the innovative, weird ones, then the MC5 just played really good rock ‘n’ roll.  But, since when was making solid rock music a crime?

And the first Pink Fairies album is loaded with solid rock tunes.  The primary styles seem to alternate between crunchy Slade and Mott the Hoople style hard rock and Floyd-style laziness.  Rudolph shows off his various tricks; dirty, distorted guitar riffs, normal, non-distorted riffs, phased psychedelic solos and pretty acoustic melodies.  What among those do you think is my favorite approach?  The ace rockers are “Do It”, “Say You Love Me”, “Teenage Rebel” and “The — HEY, WAIT A MINUTE!!!  “The Snake” isn’t on the album?!  What, arrgggglll!!!!

Incidentally, these are the lyrics to “The Snake”, the greatest Pink Fairies song and one of the greatest rock tunes ever, a locomotive of pre-punk, aggressive riffing and fast drumming!  It was later covered by Tank!!!

I like this album; it’s got some great songs on it.  “Teenage Rebel” is a real headbanging song about being an outcast baby!  A rebel!  You don’t want to run into this guy in the streets!  He’ll rough you up with this angry long hair and motorcycle jacket!

Although I don’t know why this tough, angry rock band would want to put “War Girl” and “Never Never Land” back to back considering how these songs are so laid back.  That’s no way to keep the speed snorting long hairs from falling asleep, is it?  Both are good songs but they just seem to slow down the momentum.  Also “Never Never Land” sounds more like a Deviants than a Pink Fairies song.

I should mention somewhere that “Track One, Side Two” is accompanied by piano, “War Girl” has some bongos on it and “Uncle Harry’s Last Freak Out” crams a bunch of riffs and solos together for 11 straight minutes and sounds as though someone forgot to fade song earlier. 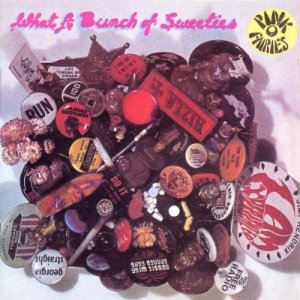 The album starts with a joke about the Pink Fairies playing on URANUS!!! Hahahahahha!!!

Of the the group’s three studio albums, What a Bunch of Sweeties is my least favorite.  It still has some decent material but some of these songs are either too long, not that great or just consist of goofing around.  For instance opening track “Right On, Fight On” is a solid piece of early 70s fist pumping, major chord rock but does it need to be eight minutes long?  Then the very next song “Portobello Shuffle”, although not a bad song, is just 12 bar boogie rock, no different from ZZ Top or AC/DC’s cover of “School Days.”  Listen to all three back to back and tell me differently!

Oh god, the next song is a novelty country tune called “The Pigs of Uranus”!!!  We’re halfway through the album!!!  Will all you Ladbroke Grove loving anarchists please tell me what you see in this band?!

We’re onto side two.  Now, I know this is a very condescending thing to say but the second best piece of music on this entire album is lifted from the surf guitar classic “Walk Don’t Run.”  The actual song it’s used in is also called “Walk Don’t Run” and is a nine minute epic that has other parts that are okay.  But, would this song be nearly as good without the classic riff played through a dirty fuzz tone?  I don’t think so!  That leaves us with three more songs…

I’m getting tired of this; why are so many songs on this album so long?  “I Went Up, I Went Down” is another eight minute Floyd style song with psychedelic effects on the guitar.  “X-Ray” is okay, I guess… but, what do I see here?  It’s “I Saw Her Standing There”!!!  So there you go, they redeemed an otherwise not so great album with a Beatles cover!

I’ve read tons about these guys being a “proto-punk” band and being all revolutionary and playing free gigs and stuff but I don’t get it.  Are you sure we’re listening to the same band?  I like dumb, early 70s hard rock!  But why is this group placed on a pedestal as something apart from that?  Actually I can guess… but is it right to have a “righteous” reputation just because you know a bunch of cool people? 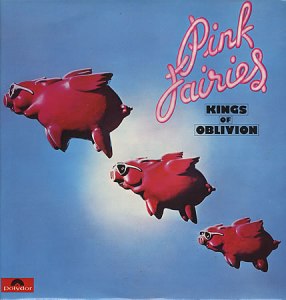 The Larry Wallis album!  Paul Rudolph left, and the band recorded one okayish single with guitarist Mick Wayne(both sides of it are included as bonus tracks on the CD reissue), but he was gone soon after, and the band recruited former UFO guitarist Larry Wallis.  Larry Wallis is one of those underrated, “journeyman” musicians, kinda like Phil Manzanera (not his style, just his reputation), who have their fingerprints on a handful of really freakin’ great, though thoroughly underrated albums in the pantheon of rock.  And whaaat an album!  No acoustic songs, no novelty nonsense, just seven jammin’ hard rock songs, which bounce back and forth from Alice Cooper-style garagey hard rock, proto-punk, longer, jammier tunes and even a couple of sleazy boogie-rock numbers.

The album starts with “City Kids”, the second best Pink Fairies song behind “The Snake.”  It’s so good, in fact, that Wallis would take it with him when he joined Lemmy in Motorhead, and Lemmy liked it so much that, even after Wallis abruptly left Motorhead, they recorded it as the b-side to their “Motorhead” single.  Just a bunch of no good street kids hangin’ ’round; probably cut their long hair and became punks a couple years later.  The only other fast song on Kings of Oblivion is the instrumental “Raceway”, which, according to the liner notes, became an instrumental by accident.

“When’s the Fun Begin?” and “Chromium Plating” are both enjoyable songs with cool, angry riffs and lots of soloing; the latter has a bunch of wicked hammer on solos and endless drum rolls that are super fun to air drum to.  And “I Wish I Was a Girl” might seem a bit long at 10 minutes; but, if I have to hear a bunch of guitar solos, it might as well be from a pro like Wallis.  Is he admitting to being a sissy in the song? “As a streetfighter I don’t make it/ when the trouble starts, I can’t take it/ the site of blood don’t turn me on/when the trouble starts, I’m long gone.”  “Chambermaid” and “Street Urchin” are about a couple of loose women that you wish you knew.

Now what do you think of your revolutionaries?  I’m not kidding though; I’ve struggled to figure out why this group is placed on a counter culture pedestal when their music isn’t all that extraordinary and their lyrics don’t go beyond standard rock topics…

In a couple years Wallis would join Lemmy in an early incarnation of Motorhead and take some of his best songs with him! 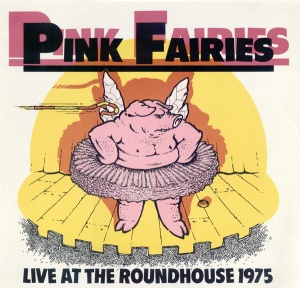 This is a live album taken from a Pink Fairies reunion gig that took place on July 13, 1975 at the Roundhouse.  The lineup for the gig is Paul Rudolph, Larry Wallis, Duncan Sanderson, Russell Hunter and Twink.  The album only contains five numbers.  Apparently they performed more but the sound wasn’t good enough on the rest of them.

The only two songs featured on this collection that come from the studio catalog are “City Kids” and “Uncle Harry’s Last Freakout.”  The other three are covers of “Lucille”, “Waiting for the Man” and “Going Down.”  Unsurprisingly the recording is bootleg quality and monophonic sounding but all the instruments are audible enough.

As far as the performances go, “City Kids”, while still great, seems a little sluggish.  “Waiting for the Man” is played like a straightforward rock song and needlessly extended to 10 minutes by guitar solos.  “Lucille” and “Going Down” are performed pretty close to their original 12 bar rock ‘n’ roll and blues rock originals, if a bit harder and “Uncle Harry’s Last Freakout” is 12 minutes long and filled with more needless guitar solos.  The group seems in good spirits and having fun but that live excitement somehow doesn’t transcend the recorded divide.  Or I just find the endless jamming kind of boring.

It’s probably obvious that I’m not super excited about listening to or talking about this release.  There’s not much else to say about it. 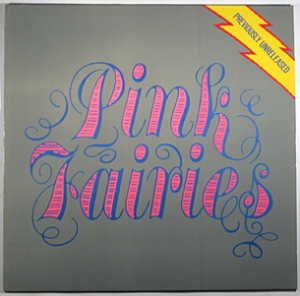 Featuring Larry Wallis and Duncan Sanderson with new drummer George Butler, Previously Unreleased wasn’t initially intended to be a Pink Fairies release.  To me it makes no difference since the band playing on this record is 2/3 of the one that played on Kings of Oblivion but I guess Larry Wallis didn’t feel like a Pink Fairy, ya know?

Previously Unreleased contains six brand new tunes and, just like the material that Wallis presented to the original Motorhead, these are basic rock tunes; remember the second Slaughter and the Dogs album Bite Back?  They’re like that.  These are hard rock tunes that lean on pub, glam and even a little bit of punk.

“Can’t Find the Lady” especially fits this punk/pub hybrid with 12 bar rockin’ and rollin’.  And that’s about it!  I honestly can’t think of anything else to say about these songs.  They’re not remarkably distinct but they’re not terrible either.  Wallis plays a mean guitar; he solos but doesn’t solo too much and the songs aren’t too long.
Don’t fret! Reviews for the rest of the catalog coming soon!