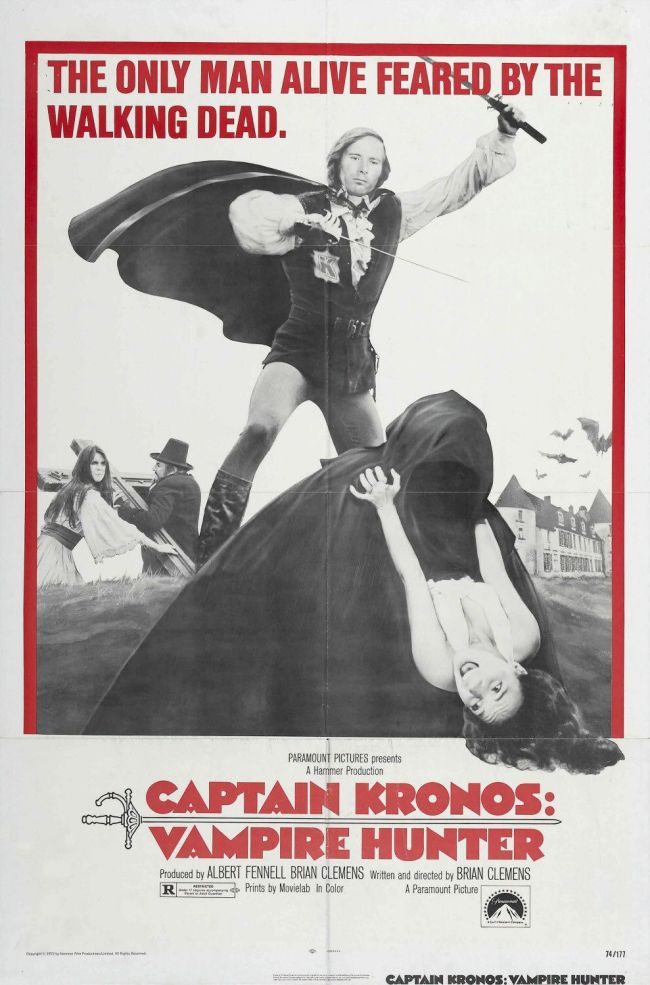 It’s been a month or so since I’ve seen a Hammer horror film.  Unfortunately Captain Kronos: Vampire Hunter wasn’t the movie to bring me back into Hammer’s world.  There’s nothing particularly wrong with the film other than it’s just kind of dull.  The poster promises more than it delivers.  Don’t get me wrong; what you see in the poster is pretty much what happens in the movie but there just isn’t enough of it.

Apparently Brian Clemens’ only directorial effort was supposed to be the start of a series of Captain Kronos films and a story was later adapted into a comic book.  Maybe Hammer should have gotten a more seasoned director like Roy Ward Baker or Terence Fisher.  The movie goes against the typical vampire mythos by having them kill during the day rather than at night.  Also they don’t suck blood and create other vampires by doing so; they suck out the youth from young men and women and turn them old and dead.  The effect actually makes them look like Steven Tyler.

I guess my main problem with this movie is I kept wondering, “Where is Captain Kronos during all of this?  How is this alleged vampire hunter letting so many innocent souls get sucked away?”  Kronos is played by German actor Horst Jansen and is assisted by the hunchbacked doctor Dr. Marcus (John Carsen).  They traverse the countryside supposedly hunting vampires by burying toads in the ground and seeing if they’re alive or dead and if alive, oh who cares?

Kronos frees a cute little lady named Carla (Caroline Munroe) from a wooden rack but who is she?  What did she do?  The only background we are given about her character is that she was being punished for dancing on Sunday.  That’s it.  That’s her entire background.  I really hope Brian Clemens didn’t think, “well, she’s a woman!  What else do you need to know about her?”  Actually he might have been thinking that otherwise why else would her only purpose in the movie be to shack up with Kronos twice.  And she acts as vampire bate, whoopdy do!  I was about to blame Caroline Munroe for being so emotionless and useless but then I realized she didn’t write the character; she was just doing what the director told her to do!

The movie is heavily bogged down with useless subplot; three asshole swordsmen harass people at a local pub and, in one scene, the doctor expresses his gratitude for having such a great friend.  The doctor asks Kronos and Carla, “am I that ugly?”  Carla responds, “you have a kind soul, that’s what’s important.”  Uh, gee thanks…

There’s some blood and way neat looking castle set pieces so I enjoyed *looking* at stuff but as far as entertainment goes, I kept thinking, “can we please pick up the pace, here?”  And, to be perfectly honest, the actor who played Kronos wasn’t exactly a virtuoso either; he basically just held the same smart-ass, “ha! I kill vampires and sleep with hot women” expression the whole time.  So  you know, watch at your own risk, I guess.