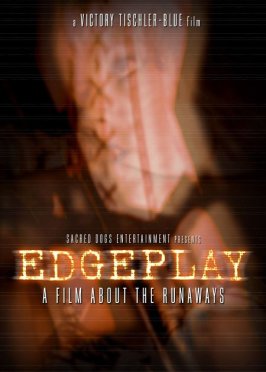 On my facebook page, I humorously remarked about how Lars Von Trier’s Melencholia is probably not the celebratory, good time film with which to bring in the New Year.  The irony is that I thought, “hey!  I’ve got this movie about John Waters’ famous transvestite/character actor pal, or I’ve got this movie about the Runaways, the all female rock band responsible for ‘Cherry Bomb’, one of the gnarliest guitar grunters of the 70s!  No matter which of these I choose, I’m in for a mighty good time!”  And boy was I mistaken!

To further illustrate, remember how in The Filth and the Fury, John Lydon says something about how, unlike every other film about every other band, their movie will show you that being in a band is hard, and it’s hell and only somewhat enjoyable if you do it for the right reason?  Well even that movie showed that, among the scary and tragic moments, there was still joy to be experienced and, in the end, something good came out of it.

With Edgeplay, which was directed by former Runaways bassist Vicki Blue, this is not the case at all.  Instead we get nearly two depressing hours, in which we barely hear a word about music and lots and lots of shit talking and disturbing accounts of a sleazy manager, who used sexual and emotional coercion to shape the Runaways look and sound.

The trouble with the film was imminent the moment former Runaways guitarist and arguably most successful member Joan Jett refused to participate or allow any original Runaways tunes to be licensed for the movie.  In her own words:

“To me, the Runaways is my baby, so you have to understand my perspective. If there’s gonna be a Runaways movie, it should be about what we accomplished, the tours we did, the bands we played with, the people we inspired. I’m not gonna participate in a Jerry Springer fest, bottom line. With any band, you’re gonna have interpersonal conflicts, but if that’s what they thought the Runaways were about—about breaking a bass or putting on make-up—well, it’s very disappointing. Very, very disappointing. I wanted nothing to do with it because that’s not the band I was in. [The film] was a totally different take on what went down.”

The basic Runaways story is that, in 1975 somewhere in L.A., producer/manager Kim Fowley helped assemble a sassy, sexy, all female teenage rock band called the Runaways, which initially consisted of Cherie Currie (lead vocals), Lita Ford (lead guitar), Joan Jett (rhythm guitar), Jackie Foxx (bass), and Sandy West (drums), and marketed them as “jailbait rock.”  Now is that your idea of “Grrrl power”? After the release of their self titled debut album, Jackie Foxx quit and was replaced by Vicki Blue. Then, after their second album, Queens of Noise, Cherie Currie quit, and Jett took over on lead vocals along with playing guitar.  After their third album, they broke up, and Cherie Currie, Lita Ford, and Joan Jett started their solo careers; the end.

On the surface, it sounds like it could lead to some interesting anecdotes, stories about tours with bands like the Ramones, but nope… They mention some of that, but mostly it’s just a bunch of really nasty back biting and harsh attacks.  That Kim Fowley and the subsequent managers employed were probably the sleaziest fuckers in showbiz I have no doubt, and it’s good to expose that; especially that really disturbing “Kim Fowley’s Sex Education” incident, which various members recall differently and became the hot topic of controversy in Cherie Currie’s autobiography.  But there’s no victory at all!  It’s just trashy Entertainment Tonight style shit talking!

Even during the Japanese tours and success stories, there is still an air of tragedy throughout.  Blue interviews every other member except for Jett for obvious reasons.  Although she technically didn’t interview Kim Fowley since he made some absurd demands like insisting on singing his interview answers and then licensing them (?!), Blue managed to secure some VH1 interview footage.  They also interview Jackie Foxx’s and Cherrie Currie’s parents and Suzi Quatro as well.

There is a little bit in there about the music; for instance, “Cherry Bomb” was written on the spot at their first rehearsal; Lita Ford was influenced by Jimi Hendrix and Ritchie Blackmore and could wail on the “Highway Star” guitar solo; their producers didn’t trust certain bass players to play in the studio; half the members wanted to be a metal band, while the other half wanted to be a punky glam band; and several members patterned themselves off their individual idols, with Jett as Suzi Quatro, Currie as Bowie – even though it seems she more has the macho rock swagger of a Roger Daltry or Robert Plant – Ford as Ritchie Blackmore, and Foxx apparently as Gene Simmons (?!).  That’s the kind of shit I wanted to learn about; not how the members all shacked up with each other.

And, as mentioned earlier, we don’t get any original Runaways music; the closest we get are their covers of “Rock ‘n’ Roll” by the Velvet Underground and “Wild Thing” by the Troggs. Instead, the needlessly grainy interview footage and otherwise poorly shot film is spiced up with god-fucking-awful hair metal that was written and/or performed by Lita Ford and Suzi Quatro explicitly for the movie.  And it NEVER stops!  The music just keeps playing in the background as if on loop!  I’m not kidding!  How could Suzi Quatro – responsible for “Glycerine Queen” – make such lousy music?

So that’s the story of the Runaways; six teenage girls got thrown into the music industry machine of sleaze, sex, drugs, rape, unwanted pregnancies, attempted suicides, physical attacks, and broken Nikon cameras, got spit out, and that was it.  Also, apparently, Sandy West shoved loaded guns down people’s throats and broke people’s arms for loan sharks. How cute. No but obviously Lita Ford, Joan Jett and, to a somewhat lesser extent, Cherie Currie launched successful careers and good for them.  But if you’re looking for a film about women triumphing in the male dominated rock ‘n’ roll music industry or something that isn’t just a bunch of depressing ass bullshit, don’t look here.