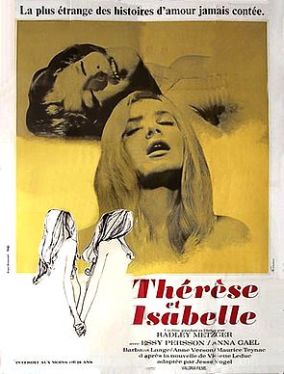 But, there aren’t even that many scenes that would need to be shortened.  Regardless of film’s salacious poster, the majority of the film’s 118 minute run time focuses on the relationship between the two girls and Therese’s strained relationship with her mom on account her marrying someone after her husband died.  In other words, if you went into this to see some black and white lesbian shagging, you’re gonna be bored to tears my man!  This ain’t no 65 minute nudie cutey, Bary Mahon picture.  This is art, dammit!

And if you thought that last sentence was said with even an ounce of sarcasm, then you’re mistaken my friend.  The only thing preventing me from giving Therese and Isabelle four iron crosses is that it may have run just a little too long, it had some terribly corny narration which described things that didn’t need description and a horrendous score that sounded way too old for a movie that was made in 1967.

These are all minor complaints, mind you.  The film looks fantastic with some brilliant master shots; it didn’t hurt that the movie was shot on gorgeous real life locations, such as old churches, courtyards, swanky restaurants and cafes.  Metzger did some crazy, awesome things with shadows that I found pretty interesting as well.  The stairway sequences looked especially exquisite.

The movie is based on the Violette Leduc novel of the same name.  I haven’t read it so I can’t say how closely the movie follows the book but that hardly matters.  The story kicks off when an adult Therese (Barbara Laage) visits the Catholic school she attended as a teenager and begins to relive the memories.  Almost right away, young Therese (Esse Persson) meets Isabelle (Anna Gael) and the two become fast friends.  It’s pretty clear who was driving the boat in the developing relationship between the two; Isabelle is a gorgeous blonde who eventually seduces the slightly more plain (though, by no means ugly) Therese, which leads to the latter’s sexual awakening.

The movie is told slightly out of sequence, with their little liaisons being interspersed with little plot details such as the strained relationship between Therese and her mother on account of her marrying someone following the death of her husband.  The little detail of Therese’s mother looking more like Isabelle than her own daughter and drama that ensues when Isabelle accuses her mother of betraying her by marrying adds a bit of a lesbian Oedipus complex to the proceedings.

Elsewhere, we are briefly introduced to an annoying, playboy named Pier (Remy Longa), who later takes part in a brief tryst with a curious Therese.  In a later scene, the two ladies play hooky and visit a cheap hotel in an attempt to hook up but just end up leaving the place since the atmosphere wasn’t right.  Other than that, there are numerous, whimsical moments, such as the one where the two ladies annoy an automobile driver by riding their bikes together and not letting him pass.

The sex scenes are more sensual than dirty but as mentioned, the voice-over narration is really stupid.  The narrator uses out-dated terms such as “pearl” when describing the clitoris for instance and there is no way even the most mature among us can hold in the laughter; maybe, during those scenes, you should mute the sound?  Still though, regardless of the fact that the sex was simulated and you really only see the two ladies facial expressions as it’s happening, the scenes are effective in delivering the raw emotions that such a thing should deliver.  Also the nudity is brief.

I have a feeling The Lickerish Quartet isn’t going to be so wholesome.