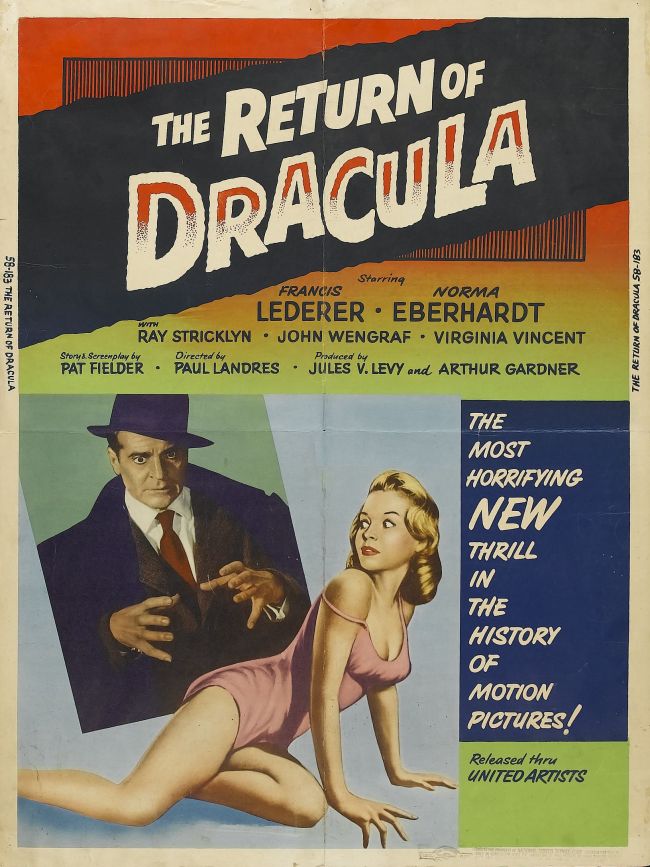 The title for this quick, little drive-in picture from writer/director Paul Landres is a little misleading since it’s not a sequel nor canonical in any way with any other Dracula story or franchise.  It’s just a one off story about a vampire that assumes the identity of a Czech artist, moves into a small town and proceeds to terrorize its inhabitants.

That’s okay though.  For the most part, it’s a good, fun little thriller with all of the vampire movie cliches and typically expected twists.  There isn’t that much to say about it.  Francis Lederer is the vampire who acts “mysteriously” by sleeping all day, going out at night and refusing to attend social gatherings- including a Halloween party where you’d think he’d fit in fine.

The acting is pretty standard stuff to get you through the plot but the movie looks cool so that’s a plus.  There are a few well placed shocks, including a corpse, among other stuff and the climax in the cave is pretty cool as well.

I know it seems odd to give three out of four iron crosses to a movie which I have so little to say about but, really there just isn’t that much to this.  There’s a neat mausoleum scene at the beginning and cave at the end looked cool but there just that much more to say about it.

It did come at an interesting time in horror cinema.  By the late 1950s, the horror movie was all but dead and it seemed that many of the studios tried to keep horror in a modern context since it takes place in the modern time.  This one sort of fell by the wayside by the time Hammer and American International breathed fresh life into gothic horror cinema with their color adaptations.