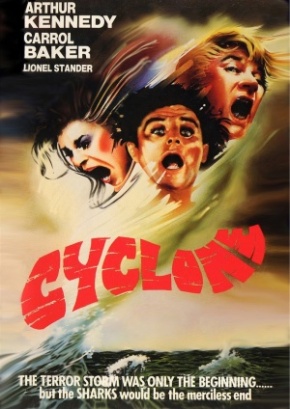 Yeah, I know the poster says Cyclone but I prefer the other title, Terror Storm, because, you know, it’s funnier.  We  have another would be masterpiece from Rene Cardona Jr., who, for some reason, does not know how to edit a movie to a reasonable length.  There is no reason why Terror Storm should be 118 minutes long.

My other beef with the movie is that there is too much humanity in it.  It’s a freakin’ Rene Cardona Jr. picture!  I’ve already seen Tintorera: Killer Shark and Guyana: Crime of the Century so I know this guy’s modus operandi so I don’t understand why they needed to have the touching scene where the woman has the baby and everyone takes turns holding it but hey…

Funny how Terror Storm has more to do with sharks than Tintorera: Killer Shark.  It also would have been a pretty standard disaster film like The Towering Inferno or The Poseidon Adventure but this is Rene Cardona Jr. and only recently he produced his father’s film Survive! about a group of people in the Andes forced to cannibalism.  So, why not make his own movie with cannibalism?

Basically a tropical cyclone causes a plane to crash and a ship to sink and, as a result, the survivors end up on a mid-sized boat that is touring some area in the tropics.  The survivors are forced to ration food and water and to deal with each other.  Among the passengers include Carol Baker who has a pet dog, Olga Carlotos (the girl from Zombie who gets the wood splint in her eye) as a pregnant woman, another Zombie cast member who I forgot, Lionel Stander (who was in a bunch of cool movies including Roman Polanski’s Cul De Sac) and Andreas Garcia (the brawny guy who looks like Elliott Gould and was also in Tintorera: Killer Shark).  Stuart Whitman is in it briefly as well but his role is pretty minimal.

Let’s see; at first people try to act civil to each other and then shit starts to get real.  They kill Caroll Baker’s dog and eat it, cut parts out of somebody to use as fish bait and eventually eat someone.  A couple people die and the Elliott Gould lookalike plays the clear-headed, rational guy who tries to keep everybody in line.  There’s a preacher, there’s a couple angry fishermen, there’s a little girl and there are a bunch of other stock people who are not really worth mentioning.

The best part is near the end where you think the passengers are saved and then the sharks start eating them.  I know I gave away a lot of what happens in this movie but you know damn well you don’t care about story or character development.  You just want to see crazy and sick shit occur.  And it does but just not often enough.  You have to wait long periods of time for stuff to happen.  At least when it does, it’s fairly graphic.  Again, though, Cardona Jr. could have edited this down and sped up the pace.