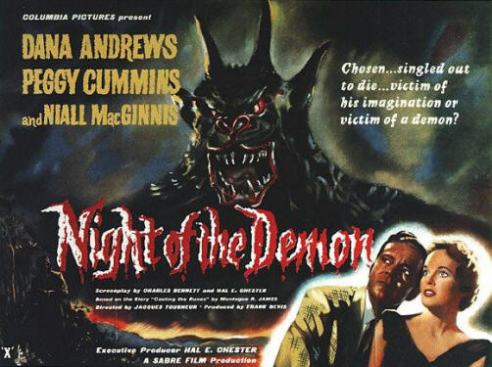 I ended up watching Night of the Demon twice because the DVD company that put it out thought it would be cute to mislead the consumer by claiming that the DVD contains two entirely different movies, both of which feature an angry looking puppet monster that looks like Oderus Urungus from Gwar. 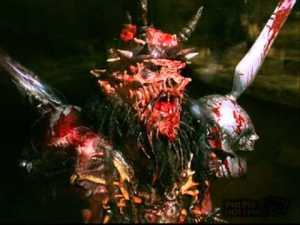 The sad truth, however, is that Night of the Demon is the uncut British version which earned an “X” designation from the British rating board, while Curse of the Demon is the butchered American version, from which so much is missing it’s hard to tell what’s going on.  Nah, I play.  The longer version just had longer dialogue scenes.  Otherwise there isn’t that much of a difference between the two.

Curse/Night of the Demon is a cool movie because there’s this Satanic black magician named Dr. Karswell (Nial MacGinnis) who casts spells on people and causes that giant demon to come out of the sky and kill those who oppose him.  However, since nobody else witnesses the demon, people think the victim dies from getting into gruesome accidents, yet nobody can explain why the person has all those claw and bite marks on his body.

Enter Dr. John Holden (Dana Andrews), the hilariously serious skeptic who has “studied” the magics and has “proven” they’re all fake.  You really have to suspend your disbelief to go along with a plot, in which Dr. Holden’s entire body of research consists of disproving the super natural.  His assistant is the lovely Joanna Harrington (Peggy Cummins), whose father was one of the victims and who surprisingly becomes Holden’s love interest because, ya know, she’s pretty and they’re alone together a lot so why not?

The movie was directed by Jacques Tourneur, who did a lot of those Val Lewton horror films and some earlier ones so you can at least know the movie will look very cool, with neat angles and expressionistic lighting.  In addition to that, there are way cool sets.  Andrews visits Stonehenge, old European peasant homes and big, gothic, castle locales all in the pursuit of answers to the mystery of why people have been inexplicably killed.  He’s there to prove that the passing along of some evil scroll is all a bunch of superstitious hokum but – and I’m sure you guessed this – as the plot develops, Andrews’ skepticism begins giving way to belief or at least, a slightly more open mind.

I don’t know how much research went behind this thing but we get a mish mash of super natural concepts from Satanism, black magic, white magic – Karswell entertains little kids with magic for Halloween – and witchcraft.  There’s even a seance in the film.

But what it amounts to is basically a unique take on a monster movie crossed with a super natural thriller.  It’s fun and the ending allows for the viewer to have gotten the “payoff” while leaving the characters in a state of suspense.