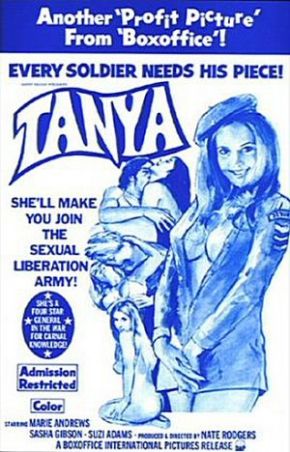 Tanya was inspired by the 1974 Patty Hearst kidnapping, in which a high society girl gets napped by a group of radical, left wing revolutionary types who set out to make a statement.  The only statement they make is how much they like sex.  There are five members in the group, their radical black leader Cinque (B.B. Hinds), an overweight white guy who looks like David Crosby, two white chicks and a black chick.  Then enter Tanya (Maria Arnold), a sexy but innocent woman who is about to be married but very quickly learns that bedding with every other character is so much more fun.

And that’s the plot!  The kidnappers kidnap the girl, she fucks everyone, the end!  There are little bits in between involving a news reporter on a black and white TV, whose role is pretty useless and there are scenes of dialogue, usually your typical left wing mumbo-jumbo, one scene where they kill a police officer – it’s implied that Tanya exerts him to death with sex but we are not exactly sure – one scene where Cinque uses raid to kill some bugs and a few pointless, outdoor training sequences.  But, other than that, there’s just sex and more sex.  In fact, just to show how much fucking Tanya does, there is a montage of the same sex scenes we already saw earlier.  With the exception of one exterior shot and the news reporter’s studio, the majority of the movie takes place in a dingy, wooden hideout.