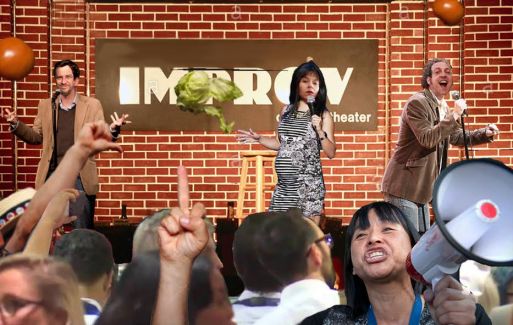 I was thinking of calling the latest episode of the Savage Hippie podcast “Brokedick Mountain” based upon one of this episode’s conversation pieces, in which I tell Ann about the horrific possibility of a man snapping his boner during sexual intercourse – it’s not THAT common, but it’s certainly possible if a girl is riding you cowboy style, your dick falls out and she lands on it wrong, so there’s more incentive to avoid having sloppy, drunk sex – but then I realized that I just made a JOKE out of something that we VERY BLATANTLY say ISN’T funny.

And bless Ann’s sweet, man loving/anti-misandrist soul, she AGREED that it’s not funny – unlike, say Sharon Osbourne, who laughed uproariously on The Talk at a man getting castrated and have his penis go down the garbage disposal. But doesn’t that make me a hypocrite? I JUST said that broken dicks aren’t funny, and then I go and make a joke about a broken dick utilizing the title from that stupid movie about the fag cowboys, that was directed by some Chink or something? Hint: my use of coarse, insensitive racial language is a teaser for us talking about how the left gets a pass to use this same kind of language because they don’t “mean it”, while people like us allegedly really do. See, you have to know what a comedian, musician or author stands for BEFORE you can enjoy his/her/its work because God forbid you enjoy something by someone who stands for something that you don’t.

Where the fuck was going with this? Oh yeah… while the first half of this episode is about sex, depravity, the godawful Yvette Felarca and broken dicks, the second half revolves around how the left is destroying their flimsy house of cards that they call the entertainment industry by refusing to focus on, ya know, actually entertaining people. Whether it’s Sarah Silverman, Amy Schumer, Patton Oswald or the cast of SNL, these once funny – yes, Amy Schumer had a few zingers under that wide belt of hers – comedians are so paranoid about Trump’s presidency, and in the case of Silverman, actually see swastikas in their sandwiches, that they simply refuse to do anything that doesn’t push their agenda.

The bottom line is that comedy cuts across all lines. I mean, look at us; we’ve had everyone from leftist liberals to Jew-hating neo-Nazis tell us that they find us to be a hoot. Now, what’s more of an accomplishment: playing to your own echo chamber or getting fandom from people who normally would hate yer guts? After all, we all bleed red, right David?

This week’s Sounds of Marshabaloosh features Big Business, the two piece, heavy rock combo consisting of bassist/singer Jared Warren and drummer Cody Willis with their song “Father’s Day” from their latest album, Command Your Weather. At one point, both members joined the Melvins for several albums and tours and then later added a guitarist to their lineup, but now they’re back as a power duo, and boy do they rock! Listen to the song here!

The song at the end is “The Diet Has Failed” by the Yesticles.