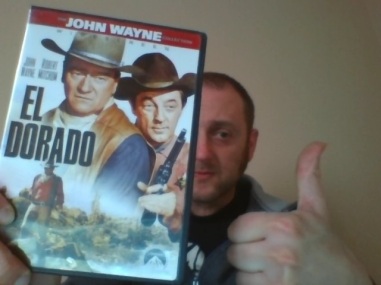 Let it be known that, while what you get caught saying on camera or online can cost you your job and tarnish your reputation, that what you said nearly half a century ago under an entirely different context, will also forever tar and feather you.  Therefore, if you do want to have a legacy in American or Western history, your best bet is to never have said anything then, that would be considered unthinkable now.  Since time machines have yet to be invented, we’re not likely to get an apology and recantation out of John Wayne.  Therefore May 26th will not be John Wayne Day in Sacramento, CA.

For you see, California lawmakers voted 35-20 to not honor John Wayne’s birthday because he made the following statement in an interview with Playboy magazine back in 1971:

With a lot of blacks, there’s quite a bit of resentment along with their dissent, and possibly rightfully so. But we can’t all of a sudden get down on our knees and turn everything over to the leadership of the blacks. I believe in white supremacy until the blacks are educated to a point of responsibility. I don’t believe in giving authority and positions of leadership and judgment to irresponsible people.

Whoopdi-fuckin’-do!  This piece of “hate speech”, which was said back in an era where civil rights/women’s lib/hippie long hairs/soon to be future leaders were clashing with old timey hard hats, who remember the good ol’ days, is the sole reason that Sacramento won’t honor American film icon John Wayne.  I don’t agree with this statement; I don’t think any group should have supremacy over another, but does that alone warrant not honoring one of America’s most enduring cultural icons?

By all accounts, John Wayne represents an America which is all but long gone, existing in little pockets of the country that get laughed at by “enlightened” urban elites.  Hell, as mentioned by Jim Goad in his latest piece for Takimag, which I more or less ripped off, Wayne and cowboys in general are used as a symbol for all that was wrong with America.  The hardcore punk band Millions of Dead Cops even have a song called “John Wayne Was a Nazi.”  This was their way of saying that he represents racism because a lot of his film characters fought Indians, who were bad guys.  I’d put the blame on directors like John Ford and Howard Hawks or their screenwriters, but that’s just me.  It’s also ironic to call John Wayne a Nazi when he was in several World War II movies, fighting for the Allies.  But, I highly doubt Millions of Dead Cops were concerned with any of that.

The point I’m making is that John Wayne and Westerns in general are not liked by very many young people these days.  Most old films aren’t liked by young people these days.  I get it; they’re slow moving, the acting is old timey, the dialogue is often corny since the actors weren’t allowed to swear and had to use words like “buster” instead of “bastard” and you never actually saw anyone bleed when they got shot.  But, of all the genres, Westerns get shit on the most.  Millennials can totally eat up classics like Psycho, with the violence, pathos and psychosis and they have no problem sitting through 12 Angry Men, in which one juror tries to convince the other eleven to acquit a wrongly accused youth, who it was implied was being accused almost entirely due to racial prejudice.

Hell they’ll watch Spaghetti Westerns since the characters are all a bunch of ambiguous assholes out for their own personal gaines – though I wonder how they feel about Sergio Leone’s sympathetic treatment of the confederacy in The Good, the Bad and the Ugly.  But the classic Westerns, in which John Wayne plays the all-American, gun-slinging hero are looked at as corny, representing values that most young people simply can’t relate to.

Personally I love John Wayne’s films.  In Red River, he and Montgomery Clift guide a herd of cattle across the rugged countryside, facing whatever dangers that come their way.  In Rio Bravo, Wayne plays a sheriff of a town and helps his buddy Dean Martin kick his drinking habit, after which, the two of them, along with Ricky Nelson, have a wild shootout with some bandits.  In The Searchers they genocide Indians… juuuuuuust kidding, but that’s what my friend Brian said during the climactic shootout when he, Kristen and I watched it.

If you want to trace how I got to where I am today, blame it on the movies!  That’s right; blame it on liberal ol’ Hollywood.  In 2005, I was an overnight film convert.  At first, I watched nothing but old monster pictures, the horror classics of the 30s and 40s – I literally watched The Mummy’s Hand, The Mummy’s Ghost and The Mummy’s Curse in a single evening – then moved into old science fiction films with the flying saucers and the giant rubber monsters that crush cities, then onto the gangster pictures and film noir and lastly onto the Westerns.  And of course I’ve seen the what’s what of classics; Gone with the Wind, Casablanca, Citizen Kane, etc.

I basically viewed old cinema as a window into another time and another world.  Nothing too surprising there; old cars, old buildings, old streets, old sidewalks, old etc. etc..  And, man oh man, did I enjoy the exploits of the private dicks Sam Spade in The Maltese Falcon and Philip Marlow in The Big Sleep.  I got a kick out of watching Burt Lancaster and Yvonne DeCarlo double cross a gangster played by Dan Duryea in Criss Cross.  I enjoyed watching Paul Muni become the biggest and most violent gangster in Chicago, only to get his comeupponce when he gets his brains blown out by the cops in the original, 1932 Scarface.  I enjoyed watching Richard Widmark and a bunch of underworld scum going after a piece of mircofilm in Sam Fuller’s cold war thriller Pickup on South Street.  And wowee, did I like watching Mike Hammer grab the one guy who was tailing him by the collar, slam him into a wall and slap him around a few times in Kiss Me Deadly.

I enjoyed watching the American military blast down the flying saucers in the surprisingly titled Earth vs. the Flying Saucers.  I felt bad for three explorers watching all of their gold dust blow away in The Treasure of the Sierra Madre.  I can’t honestly say I was frightened by Invasion of the Body Snatchers, but I can say it was disturbing watching the people of that little town being replaced by zombified replicas of themselves; I think the fright factor was removed by the fact that the movie was framed as a flashback, so you know that it ends well.

That one’s always a trip; liberals and conservatives are always arguing about what that movie is actually saying. Liberals say it’s about conformity in middle America brought on by consumerism.  Conservatives say it’s a red scare warning, that you never know who might be a commie fink.  I say, “who cares?”  It’s a great, compelling little thriller.  The fact that Don Siegel went on to direct Dirty Harry still doesn’t indicate anything; after all, you could be against middle class conformity, yet still believe there’s a class of criminal that doesn’t deserve due process.

But this piece is supposed to be about John Wayne and why young people don’t like him.  He represents old timey values and traditional masculinity, but what’s interesting to note is that many of the above movies have plenty examples of those values as well.  Who is Ralph Meeker (Mike Hammer) if not an alpha male?  Or Humphrey Bogart (Sam Spade, Philip Marlow)?  My thinking is that, though these characters are still tough guys who settle their scores with a bullet or a fist, the movies throw them into morally ambiguous situations, and young, nihilistic liberals love that.  Good guys and bad guys?  Fuck that shit; everything’s relative.  I wouldn’t be surprised if one of these young dipshits calls The Thing from Another World racist because the crew stationed at the arctic decided to defend themselves against the creature, rather than capturing and studying it.

In John Ford’s 1962 classic, The Man Who Shot Liberty Valance, John Wayne goads the city boy lawyer Jimmy Stewart into punching him in the face.  He laughs it off, but the implication is that he made the lawyer throw his first punch, making him settle things the old fashion way, and thus turned Stewart into a real man.  After all, what kind of man are you if you haven’t thrown a punch or two in your life?  Sometimes I think the same about shooting a gun, and I wish I could take one or two of my liberal friends with me to the range, and help man them up a little more.

Anyway, Cheers John Wayne, I’ll have a drink for you on May 26th.