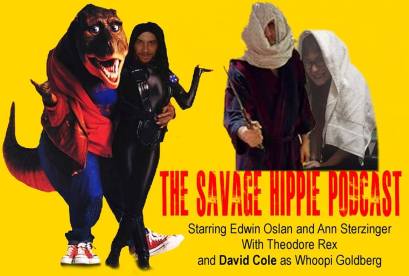 Here is the audio to the eighth installment of the Savage Hippie podcast. Again, this is one I’m super proud of in spite the fact that, if there is one episode you would choose to call our “racist” episode, it might be this one. I mean, I personally don’t think it’s racist, just irreverent as some have said, but some might not appreciate our off-color “Allah-Akbars” and “Buggita-buggitas.” Ann Sterzinger is broadcasting live from the Muslim colony of France if you can believe it! Just walking around, talking about the culture and politics of France in the wee hours of the morning, while David Cole and I make jokes about people who throw spears and worship rocks. Yep, we are a classy bunch, all right! Also, one of the people in the comment section said Ann reminds him of the pop singer Ladyhawke, agree?