Probably the stupidest, yet longest lasting argument in the punk rock underground is whether a person can listen to a band in spite what they stand for. I remember getting chastised for professing my love for… ready for this… BAD BRAINS. One would think that being a fan of the Bad Brains, the all black punk band from Washington, D.C., would be the ultimate virtue signal, right?

Nope. As it turns out, the Bad Brains weren’t too fond of homos, and they weren’t quiet about it either. They attacked fellow hardcore bands like the Dicks, the Big Boys and Hüsker Dü for being “bloodclot faggots.” See, the Bad Brains adopted Rastafarian culture, and one thing the Rastafarians, much like the Muslims, can’t stand are “bloodclot faggots.” Now, does that matter to me personally? Of course not. I just like their music; super tight and fast hardcore punk with metal riffs and the occasional reggae jam thrown in. Most of the time I can’t even understand what they’re saying.

But I was yelled at for being one of those guys who “only cares about the music.” I’M NOT KIDDING. I was accused of not being righteous enough, of ONLY caring that I liked the music. You can probably assume that, for some of these people, listening to Skrewdriver is completely out of the question. I’ve talked about Skrewdriver before, but as a refresher, they were a 70s punk band that dressed like skinheads and released a couple of singles and one album of normal, generic, but still pretty catchy punk rock before their singer, Ian Stuart, continued to use the name with a whole new set of backing musicians and reinvented them as a white power band. And musically speaking, they’re okay.

Actually this type of thought policing has become pretty common in punk rock and other underground music genres; among other things, it has lead to bands being thrown off festivals and out of gigs for allegedly having “nefarious” views. “What? Your band was released by THAT label?” “You were seen hanging out with THAT guy?” “I KNOW what those symbols REALLY stand for, bucko! We’re hip to your game!”

Hey look! Here’s Wattie from the Exploited hanging out with what looks like a Nazi skinhead. 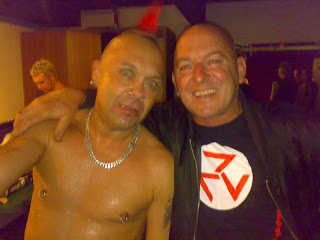 But look at this! Here he is hanging out with a black guy wearing a Motörhead t-shirt! 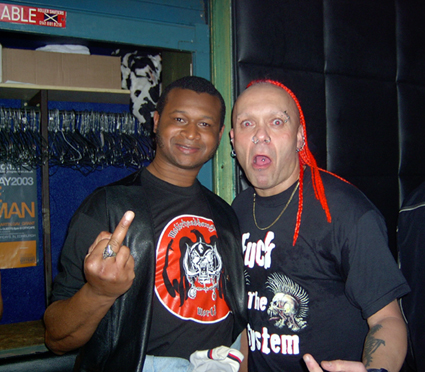 Well, fuck me sideways! Which one is it? Is he a Nazi, or is he not a Nazi? I don’t know, and I won’t ever again be able to listen to the Exploited until this issue is resolved.

Sadly, with such a low bar set on the quality of the music, and such a high bar set on “social justice”, the question I have for Antifas, punk rockers and other underground music weirdos is, “how SHITTY will you let your music get provided that the band shares your views?” Case in point, this brand spanking new video from a band called Stray From the Path. Go ahead, watch the video. I dare ya!

Not sure how far you got into video, but it’s not good. First, there’s the music. After a few bars of pick slides going up and down the guitar neck set to a funky drum beat, the singer, who (perhaps ironically) has a similar haircut to Milo Yiannopoulos and sounds like the singer from Rage Against the Machine, shouts “you just got knocked the fuck out!”; then a generic, overly-compressed, nu-metal riff plays behind his whiny, white boy rapping. Some of the phrases I could make out in the song include “fist held high”, “punishment fits the crime”, “racist President”, “it’s 2017”, “eye for an eye”, “that’s what he said”, “fuck him, and fuck you too”…

…did he just say, “we used to never let these dickheads have any control”? Which “dickheads” is he talking about? Is he implying that, back in the day, his righteous peeps, who don’t look like their older than 25, never let the Nazi skinheads have control of a venue?

Back up the train, negro. Since I was 14 years old, back in the late 90s, I started going to shows at Harpos in Detroit, where I saw Gwar (where my ex Melissa fucked Dave “Oderus Urungus” Brockie!), the Misfits (with Michale Graves, the place was packed!), the Dead Kennedys (with Brandon Cruz, only about 20 people showed up!), Danzig, Clutch, Corrosion of Conformity, Manowar, Motörhead, Cradle of Filth, Rotting Christ, Usurper, Six Feet Under, Murphy’s Law, Cannibal Corpse and even heavy metal’s number one homo ROB MOTHERFUCKING HALFORD. The place was known as a hangout for neo-Nazis, and I’ve even met a few. Someone told me a story where a bunch of Nazi skinheads started fights and pushed people around at G.B.H. and Napalm Death shows since both of those bands are openly anti-racist. At the Danzig gig, I saw a bunch of them doing Hitler salutes. Now, is chunky Milo implying in the video that he and his peeps would have taken a stand against these guys, many of whom are built like linebackers and either fresh out of or on the way to prison? I’m sure that would have worked out REALLY well.

…other choice passages from the song include “preach hate”, “what makes you think that you’re the superior race?!” and of course the very original “NAZI PUNKS FUCK OFF!!!”.

But secondly, and barring the fact that the band members don’t look too different from what many AltRighters look like, the video tells the story in which a guy in a MAGA hat goes into his home, where he has a Hitler poster and a bunch of swastikas on his wall and a TV playing clips of Richard Spencer at one of his “identitarian” conferences, and plan some sort of terrorist attack, only to have his plans foiled by “brave” anti-racist “activists”, who break into his home, mug him at gun point, beat him down, tie him up and tattoo a swastika onto his forehead.

I mean, I can’t even. Andy Nowicki and I disagree over which is the more important problem with the video; that it sets up a ridiculous straw man, saying it’s okay to beat up anybody who you perceive to be a Nazi, which Richard Spencer is most certainly not (they could have at least gotten it right and put Andrew Anglin on the TV) or that the song sucks ding dongs. I say the latter. As of this writing, the “Goodnight Alt-Right” video has received 16,301 dislikes (one of which is mine, thank ya very much!) and 2,960 likes. It’s not totally clear if most viewers of the video don’t agree with the message, just think the song blows or both. If you want a video with a stupid, “anti-Nazi” message that’s set to a good song by a good band, click here! At least the Off! video resembles a grindhouse flick and has Brian Posehn, Dave Foley and David Yow playing Nazis in it.

But the question I have for the Antifas, punks and underground music weirdos is: are you okay with rap metal just as long as they don’t do it just for the nookie?