What, No Thanks for the Narcissistic Supply? 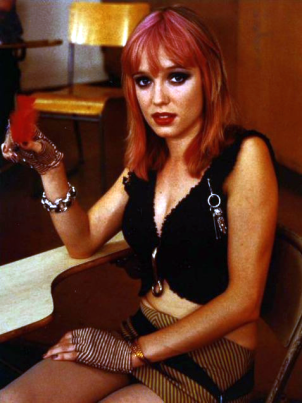 Before you ask, “why are you wasting so much time writing about a person who you allegedly don’t care about?”, the reason is because my readers demand this kinda trashy stuff, and I don’t wanna disappoint ’em! You may now continue.

A former friend of mine is the stupidest, laziest and least creative narcissist I have ever known. Rather than channeling her attention whoring skills into getting a writing job at Slate, Salon or Buzzfeed or starting a youtube channel, where she could utilize her button-covered denim jacket and layers of cat-eye makeup to become the punk rock Laci Green or someone equally as annoying, she spends every waking (woke?) minute of her day on social media posting about how “outraged” she is at the “patriarchy” and “rape culture” and “manspreading” and “mansplaining” and all of the other goofy nonsense umpteenth-wave feminists invented so they could have something to feel righteous about. In fact, she’s so desperate for righteousness points, that she fails to realize that, in an effort to “raise awareness”, she causes all of the “sexist” and “racist” articles she posts to get more clicks, helping turn their authors into mini-celebrities. It’s through HER, that I first learned of Matt Forney, who I now consider a friend. So, thanks, Br(redacted).

I actually blocked this person along with everyone I used to be friends with that jumped aboard the leftist SJW bandwagon and considers Donald Trump to be Hitler/the Antichrist/etc. etc. etc. because having people like that on your Facebook friend list is a liability. You post something; that person comments on your post; you respond with anything that could be interpreted as “hate speech”; someone reports you; and you spend a month in Facebook jail, not being able to comment on people’s posts or respond to messages. You’re like Bruce Willis in The Sixth Sense; people wonder if you’re ignoring them, and you’re forced to start a second, third and forth FB account to keep in touch with them and peddle your wears. On top of that, leftists/liberals/SJWs have such thin skin, that you’ll get an angry mob that doesn’t have a clue about politics attacking you as a person, rather than trying to refute any of your well thought out points. Some of my favorite responses from these people are “kill yourself”, “delete your account” and “stop talking.” This all comes from people who consider themselves adults. Interacting with them is just not worth the hassle.

But apparently there isn’t much going on in Grand Rapids these days because the person that I’m talking about in this piece decided many years after we stopped talking to broadcast my current activities to her Facebook community by posting a recent Guardian article in which I’m quoted. I know it’s not exactly secret information, but how did she stumble upon it? Is she an avid reader of The Guardian? More importantly, why did she care enough to broadcast it to her little world? And EVEN MORE importantly, why did her little community feel the need to respond so passionately? One guy said I’m a white supremacist, and one guy said that I’m not rock ‘n’ roll (SLAM). It’s definitely flattering that so many people think of me years after I stopped living there and even more flattering that people feel so disgusted at the notion that I help David Cole organize events for people in Hollywood who hold “unpopular” views that could cause them to lose jobs in the film industry; I mean, GOD FORBID you talk about balancing the budget, shrinking the size of the federal government or supporting a more sensible, less debilitating immigration policy.

So, a week or two after I learned about this through a mutual friend, I sent the person on who this piece is based a little message in an attempt to advertise the Savage Hippie podcast to her friends, while also attempting to prove that she really IS that big of an attention whore.

Can you guess what she did?!

Now, GRANTED, my message wasn’t exactly charming, cute or clever. I told her how a “little birdie” told me that she was thinking about me and my activities, and I talked about the Savage Hippie podcast, mentioning both David and Ann and what they did, and for shits and giggles, I threw in this little story about our loyal listener, David McPheeters, who is going to be doing time for shooting someone in the back five times somewhere in Jacksonville, FL.

In response, she reported me to the Zuck, claiming that I threatened her. Neither David, nor Ann, nor anybody I asked perceived my message as threatening in any way. Creepy? Maybe. Unnecessary? Well, I mean, without it, I wouldn’t be able to write this piece for you, my lovely readers. The powers that be at Facebook didn’t think it was threatening either, otherwise I’d be in FB jail right now or at least would have gotten some sort of warning; she’ll probably chalk up my not getting thrown in FB jail to the “patriarchy” not taking the complaints of women seriously.

But was reporting me to Facebook enough for her? Take a lucky guess, cowboy.

She posted my private message on her Facebook wall, blasting it into the feeds of her two and a half thousand loyal followers; and hoo boy… there were calls for my death and my beat down and plenty of vitriol to go around for 150 or so comments/responses. One former friend suggested contacting my employer. Sorry, Sarah, but my “employer”, David Cole, wants to kill me more than you do. One person was the aging goth skank I wrote about in a different piece, who gives a mighty fine performance in bed, gives a blowjob to boot and got me beat up. She said she’d punch me herself this time; please do, but only after another blowjob and romp between the sheets. And one person even posted my phone number so people could text and harass me. Apparently their outrage wasn’t THAT sincere since I only received texts from two people; one of whom called me “a ignorant pig” (it’s “a ignint pig”, thank you very much!) and one who demanded I send a private apology. All while I was watching the Melvins! Can you believe the nerve of people trying to interrupt my Melvins concert experience?! I mean they were covering “Sacrifice” by Flipper! You don’t interrupt that.

But, let’s be honest here; rather than me send HER an apology, shouldn’t she send ME a thank you message? I mean, without me, she wouldn’t have gotten ALL of this attention from her Facebook followers, many of which are men ready to do her bidding. Especially now that she’s divorced, something she felt the need to broadcast to the whole world. I’m sure ALL of those guys coming to your aid are doing so just as “friends”, and want nothing in return… even if you were willing to give it to them.

So, I’m torn. Should I send a phony apology with this piece attached, have a mutual friend send it to her or hope that she stumbles upon it? In any of these cases, I certainly hope she sees it because I wouldn’t mind the Savage Hippie blog getting a few extra clicks.

Also, can someone ask the two Johns which band they like more: Big Star or the Raspberries. I’ve been mulling it over in my mind for the past week, and I was just wondering what they thought.