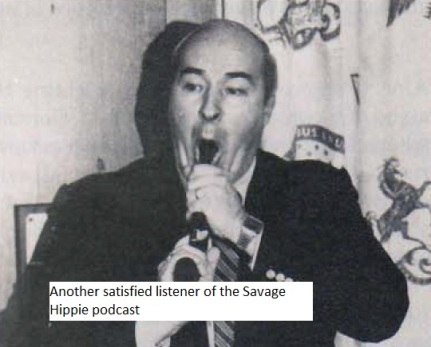 According to wikipedia, Godwin’s Law is when “As an online discussion grows longer, the probability of a comparison involving Nazism or Hitler approaches 1.”  The most obvious case is when people compare Donald Trump to Hitler using about as much logic as saying that, because both Hitler and Donald Trump breathe oxygen, Trump is literally Hitler.  But what do you call it when your discussions BEGIN with Hitler and Nazis?

Ann Sterzinger, David Cole and I explore this phenomenon and many more interesting themes in this podcast.  Just kidding; we don’t.  This is just the outtakes from the last podcast, and boy can you tell!  We practically make all of the same jokes and references, David can’t shut up about Ann’s band of choice, the Safes, we talk about the Alt-Right for :::sigh::: the millionth time and I go into more Rain Man-like musical minutiae.

But, on the bright side we answer Scott Rosendall’s question!  Once again, we screwed over poor Scott by lying to him when we said that we would answer his questions in this podcast, and though we answered it in the same recording session, we chopped off the part where we actually answered his question.  So, sorry Scott; first God gives you glass bones, and now we do this to you.

One last thing; if this podcast already has you too spent to bang your sexy wife because you furiously jerk off to it, be prepared to jerk off EVEN MORE; next episode we are having the one and only JIM GOAD as a guest!!!  I can already see you reaching for your fly…

The song at the end is “The Diet Has Failed” by the Yesticles of course.