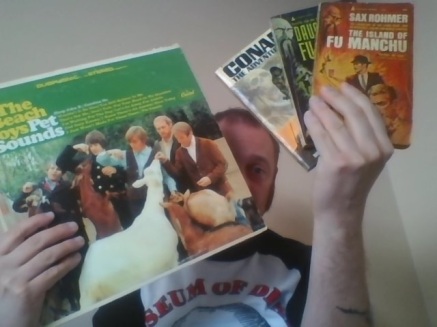 I was discussing with my coworker whether, if it were 50 years ago, I would be into the music of the day.  My guess is most likely not.  I would imagine that a 32 year old version of me back in 1966 would have been married with a couple of kids, working a standard or above standard job, living in a nice house and buying my kids the paperback books you see me holding in the picture.  After all, if we’re going by what the culture was like back then, I probably would have outgrown “popular music” by, I dunno, 1952 at age 18 and focused entirely on either getting a career or going to college, back when having a college degree actually mattered.  The only reason I’m bringing all of this up is because I saw a Facebook post reminding me that the legendary Beach Boys album, Pet Sounds, was released 50 years ago, and it got me thinking about how art, culture and society have evolved/devolved in half a century.  So, let’s start with the topic I know the most about.

1966 is probably the most important year for rock ‘n’ roll.  The album took precedence over the single, and many of the most important albums were released that year.  Rock showed the establishment that it too could be taken seriously as a form of art.  Older, established bands were no longer content to just entertain an audience; now they were officially “artists.”

On Revolver the Beatles experimented with Eastern, Sitar sounds (“Love You To”) and backwards, psychedelic tape effects (“Tomorrow Never Knows”). On Aftermath, the Rolling Stones threw in baroque arrangements into “Lady Jane” and also used Eastern influences on both “Paint It Black” and “Mother’s Little Helper” – the former on the American version of Aftermath, and the latter on the European version.  And on their album, A Quick One, the Who performed the first “rock opera” (nine minute “A Quick One While He’s Away”).  On top of that, there were all of these wonderful, unique and creative albums from new bands; Black Monk Time by the Monks, The Psychedelic Sounds of the 13th Floor Elevators by the 13th Floor Elevators, Freak Out! by Frank Zappa and his Mothers of Invention and both The Seeds and A Web of Sound by the Seeds, just to name a few.

One could say it was a gosh darned renaissance in pop music!  New ideas, new drugs, new open sexuality – the world was throwing off the shackles of the previous generation.  However, one album stands out among all of the other classics of ’66 for what sounds like a lamentation of all this “moving forward” that society was doing.  Okay, you could talk about how the Kinks sang about the loss of the old way of life to modernity, but for the sake of argument and because they’re British, let’s ignore them and focus on the album I’m holding in the picture: Pet Sounds by the Beach Boys.

If I’m not mistaken, most hipster people don’t think much of the Beach Boys because the group’s early surfin’, cruisin’, drag racin’ and tail chasin’ (okay, that last one was a bit of an exaggeration since their songs are pretty wholesome) world view reflected a macho, retrograde, capitalist, consumerist and all American culture that these days is all but a quaint memory.  That’s probably why the only Beach Boys album any of them seem to talk about is Pet Sounds.  And, I’m assuming that has more to do with Mike Love’s experimentation with orchestral flourishes, than what the group was singing about.  We want to turn on, tune in and drop out, and you’re singing songs about marriage?

When did the 60s actually start?  Well, obviously 1960, but 1960 was really no different than 1959.  We didn’t see any real spike in cultural upheaval until a few years after that.  As far as I’m concerned, the 1960s that Dennis Hopper says you weren’t in if you claim to remember it didn’t really begin until 1966.  Sure Kennedy’s assassination in 1963 put a damper on America’s soul, the 1964 Civil Rights Act rearranged how private businesses were allowed to operate, the 1965 Hart-Celler act fundamentally changed the American demographic from majority white to god knows what from god knows where and the 1965 Watts Riots led to the start of white flight from major cities to their neighboring suburbs, but a couple performances by some British rock bands on American TV in 1964 and 1965 didn’t exactly represent a rapidly shifting cultural zeitgeist as many would like to think.  In fact, if the clip that I saw of a couple of young people complaining about Jim Morrison’s onstage social/political rants are any indication, there were plenty of people from that era who viewed mainstream rock and pop music as nothing more than entertainment.

The true cultural shift began to manifest in about 1966.  Hollywood studios “broke the code” by releasing movies like Mike Nichols’ Who’s Afraid of Virginia Woolf?, with blatant references to “humping”, and the Michelangelo Antonioni film Blow-Up, which has a bunch of nudity in it because, like, nudity is cool.  Anton LaVey launched his Church of Satan because traditional religions are for the birds.  Bra-burning feminists hit the scene.  Black Panthers began to patrol the streets of major cities.  The kids were being told to not trust anyone over 30.  Hair was getting longer, sex was getting looser, movies were getting smuttier, music was getting druggier and American society was embroiled in one of the biggest cultural wars it had ever faced since, I dunno, the Civil War? 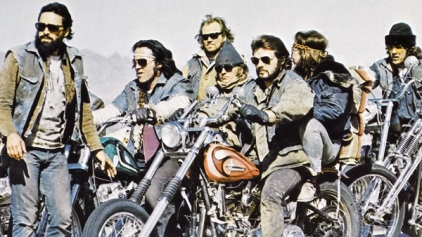 And so, it’s 50 years later.  I’m a HUGE fan of pop-cultural ephemera, music, films, magazines and books from the 60s.  I wonder if it’s possible for all of this stuff to exist if the culture hadn’t taken such a massive nose dive; would there even all these cool sexploitation films and biker films and John Waters films and Satanic films and women in prison films and excessively violent Spaghetti Westerns if there wasn’t a society to reflect off of?  Granted, the gangster and crime pictures of the 30s through the 50s were already reflecting the darker side of American culture, and of course there were horror movies.  Companies like American International made sensational movies like Teenage Doll, The Wild Angels and The Trip so that the average Joe could experience “the other side” without having to join a gang, get into a violent brawl or drop a hit of acid himself.

When all was said and done, the majority of people didn’t participate in the lunacy and cultural degeneracy of the 1960s; they worked jobs, got married and had kids.  The ones that were part of the counterculture either became burnouts or were absorbed into academia and various parts of government, taking their views with them and forcing them onto future generations.

I’m sure many of the geriatric counterculture types who were alive in the 60s would never have guessed that we would have men in women’s clothing trying to use women’s restrooms or girls excusing their sluttiness with such clever labels as “polyamerous.”  The craziest yippie, hippie, degenerate freak of the 60s never would have even considered gay marriage a possibility.  Many “freaks” I talk to, who were around back then, still love the music, but now have way more conservative views.  Yes, these were degenerate freaks; but they were mostly heterosexual, degenerate freaks.

And so we have the first verse of “Wouldn’t It Be Nice”, the opening track on Pet Sounds by the Beach Boys:

Can you imagine such an antiquated notion as asking someone to marry you marketed to the kids of today?  Forget the kids; what about the 36 year old sluts who are getting pumped and dumped for the umpteenth time by some guy in his early 30s, who doesn’t want to commit to an over the hill broad that still thinks of herself as top shelf in the sexual market place?

Jesus, don’t even bother with these lines:

Praying?!  Why that sounds like something those stupid Christians do!  Pet Sounds came out 50 years ago right about the time the culture was “changing.”  We’re now seeing a mirror image of the 1960s.  The hippies, radical feminists and Black Panthers have been replaced by Occupy Wall Street, “free the nipple” feminists and Black Lives Matter thugs, and, with the ascendancy of Donald Trump, the growing discontent of the American worker, the trend in single motherhood, increasing inner city crime, the desire to end trade agreements, overbearing political correctness and a stronger nationalist sentiment, I have a feeling the next generation may be clamoring  for a reversal of 50 years of “progress.”