You Are Now About to Witness the Strength of Capitalism 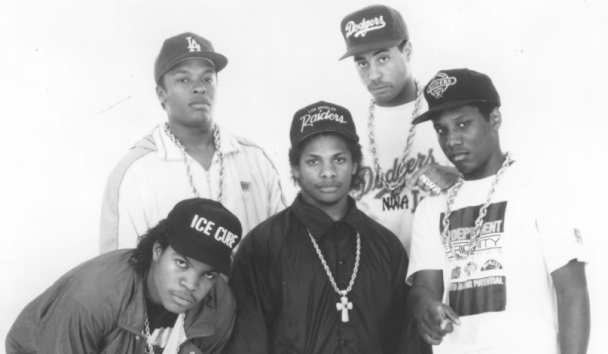 In a movie which is allegedly somewhat about the black struggle in America, the first clear message comes from a member of the L.A. Blood gang: “Why don’t y’all gang-bang them books?”  He asks this after stopping a school bus, walking on and pointing a gun directly at some young punk who thought it was cute and funny to flash gang signs of the opposing Crips out of the school bus window.  Nowhere in Straight Outta Compton, the new N.W.A. biopic, is there mention of wealth redistribution or affirmative action.  There is plenty mention of working hard and getting paid for your work.  There is also at least partial condemnation of ghetto culture.  And, when the movie does touch on the Rodney King riots, it’s with ambiguity.

Straight Outta Compton is killing it in the box office this weekend.  I went to see it and the theater was packed.  Some say the movie is doing so well because people identify with the black struggle against the cops, especially in light of the news media blitzkrieg surrounding the deaths of black teenagers at the hands of white police officers.  I say “that’s bullshit”; the reason the movie is doing so well is because of the gonzo campaign behind it; it looks like a whole heck of a lot of fun and N.W.A. has earned legendary status as the group that truly brought gangsta rap to the forefront of popular culture.  There were others before such as Schooly D and Ice T, but neither dropped as many F or N-bombs as N.W.A.

Before you plunk down $10 to see it, just keep in mind that it’s almost two and a half hours long and, with the exception of Ice Cube, who is played by Ice Cube’s son Oshea Jackson Jr., the actors barely resemble who they’re playing.  Also the first two acts are way more enjoyable than the third, which degenerates into Hallmark-style sentimentality as everyone regains their souls, becomes friends again and Eazy E dies of AIDS (presumably after spreading it to many of the fine hoes he implicitly bangs during the movie).

But the main reason I’m writing this piece is to illuminate how this movie makes one point clear: the only color that truly matters in the United States and any other free society is GREEN.

Staight Outta Compton is for the most part apolitical and, certainly, when watching you it, you never get the feeling you’re being preached at that “black lives matter” or that “cops are bastards.”  I’m to wager there are people on both sides of the cop debate who will have strong opinions about the portrayal of the boys in blue; some will feel the cops are being portrayed as purely evil and racist while some will feel they are not being portrayed as evil and racist enough.  I don’t agree with either of these stances; the cops were portrayed like cops.  It’s not politically correct to say this, but the police officers in Straight Outta Compton acted exactly as they would and should when patrolling a gang and crack infested shithole like Compton; if you feel that Ice Cube was treated unfairly when handcuffed and frisked as he exited his buddy’s house right into the scene of a drug bust, ask yourself: if you were a cop and saw a young man dressed in thuggy, gangsta rap clothes, would take the time to differentiate who’s who in a drug bust?  You know you wouldn’t so stop crying “racist.”  Perhaps they were a bit overzealous during the scene where they shoved all five group members to the ground and handcuffed them during the recording of their debut album, Straight Outta Compton, but again, we’re talking about perceptions in the ghetto.  It isn’t pretty or nice, but it’s the truth.  Yes, one does say “nigger” and I don’t agree with this.

In addition to that there is the infamous scene at Joe Louis Arena in Detroit where the police warn the group not to play their anti-cop smear, “Fuck tha Police” for fear of a riot.  They do it anyway, some fire crackers go off and the audience scatters.  In the movie the group is arrested in front of a rebellious crowd who start a riot; in real life the cops met them at their hotel, took them into the station and let them go after getting their autographs.  Truth really is stranger (and funnier) than fiction.

The movie also touches on the war on drugs.  Anyone who grew up in the 80s and watched TV will have a tizzy at seeing one of Reagan’s batter ram tanks destroy a drug house.  The war on drugs is clearly an overreaction to the crack epidemic, however, the movie glosses over probably one of the biggest contradictions in all of rap music: how nearly the entire gangsta rap industry from 1986 onward was funded by crack money.  Either Snoop Doggy Dogg or Eazy E once noted that, they were simply supplying a good to people who wanted it – stay positive, stay strong!

Then there’s the issue of how the group members treated women.  Straight Outta Compton completely avoids mentioning such tasteful, pro-feminist N.W.A. anthems as “A Bitch Iz a Bitch”, “Just Don’t Bite It”, “She Swallowed It”, “One Less Bitch” and “I’d Rather Fuck You” or the time that Dr.Dre physically assaulted Denise Barns in a nightclub and the rest of the group casually joked about it.  Their attitudes are further underscored during one of the orgy sequences that take place at a hotel room; the members throw some woman named Felicia out of the room after having their way with her and say, “Bye Felicia.”  This is played for laughs and the audience did, in fact, laugh.  The message is clear: “don’t wanna be treated like a hoe, don’t act like hoe” or something like that.  In the same scene, the members pull out sawed off shot guns and automatics on the two guys who were looking for Felicia; clearly gun control isn’t much of an issue for this bunch.

But the real irony about a movie allegedly about black struggle is that the most complicated and nuanced character is white, Jewish manager Jerry Heller (portrayed wonderfully by Paul Giamatti).  Whether intended or not, the strongest and most interesting dramatic scenes involve him and his rather close friendship with Eazy E; Heller acts as his mentor and gives some sound advice to not go and kill strong arm thug Suge Knight after Suge muscled Eazy E into writing Dr. Dre out of the group’s contract.

Heller also provided he biggest “lol” moment for this white, Russian/Ameircan Jew when he reacts to Ice Cube’s song “No Vaseline.”  A couple of lines that imply anti-semitism; “you used a Jew to break up the whole crew.”  Heller starts kvetching, “did you hear that?!  Why aren’t you guys more pissed off?!”  Eazy E responds, “Man,  Jerry, black people don’t know what anti-semitism is!”  Black Muslims sure do and Ice Cube did convert to Islam, but, he’s denied allegations of anti-semitism; “I’m anti-Jerry Heller.”  Fair enough.  Ice Cube has said some rather disturbing things about Korean people as well.  “Pay respect to the black fist/or we’ll burn your store down to a crisp.”

But, once again, I digress.  The bottom line is that, in spite of their struggles with some cops, respecting women, AIDS and censorship, the movie’s primary messages are success, getting rich and working for it.  In fact, probably the best scene to underline the point that you have to pay people for their work was when an infuriated Ice Cube with baseball bat in hand storms into the office of Priority records, shortly after releasing his hit solo album and demands to be paid for his work before smashing everything in sight.  “Take it out of what you owe me.”  Home boy don’t rap for free, ya know?